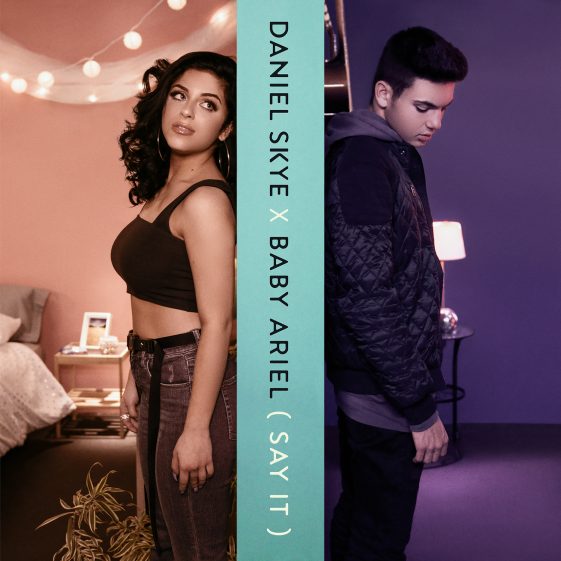 SKYE’S NEW HEARTSICK DUET AND ACCOMPANYING VIDEO “SAY IT” WITH

Daniel’s latest single “ON,”  garnered support from Seventeen, Tiger Beat, J-14 and more with Perez Hilton stating, “Bieber, Mendes….Skye?…new teen on the scene is getting lots of traction with the youngsters and his latest single, On, should get him a lot of older teen and young 20s fans too!”

“Say It” arrives hot on the heels of Baby Ariel’s acclaimed debut single “Aww” and follow-up “Perf,” which formally introduced the musical.ly star’s signature pop sound to the masses. The “Aww” music video, received over 2 million individual views within the first 24 hours and has since gone on to amass over 32 million views via YouTube alone with early support from Time, Billboard, Pop Dust, Blackbook, Tiger Beat, Idolator, and more.

Inspired by everyone from Justin Timberlake, Bruno Mars, and The Weeknd to Lil Uzi Vert and Migos, Daniel quietly sharpened his vocal chops in the most classic way—by tirelessly singing in the garage. He also taught himself guitar by watching videos online. Eventually, he launched an Instagram page and attracted a following by posting 15-second covers of famous pop songs. He performed on the 2014 Sunsation Tour across North America, documented in his music video for his first single “Maybe.”

After relocating to the west coast in 2015, Daniel teamed up with social media sensation Cameron Dallas for the viral smash “All I Want,” which debuted on iHeartRadio, reached #12 on the iTunes Top Pop Songs Chart and racked up 20 million-plus Spotify streams and 26 million YouTube views. RCA Records in 2016. Between releasing “Feelin’ You” [feat. R. City], “Stuck On You” [feat. PnB Rock], and more, he supported Bebe Rexha on tour, headlined a Macy’s back to school campaign, and graced the iHeartRadio festivals alongside Shawn Mendes, Flo Rida, Dua Lipa, and more. Skye reaches a new level on his 2018 release “Say It” with Baby Ariel.

Baby Ariel – a.k.a. Florida-based 17-year-old Ariel Martin – is by any estimation a wide-reaching worldwide phenomenon. She first began garnering epic online attention in 2015 with a series of videos on musical.ly and by 2017 had quietly built a cumulative audience of 35 million-plus followers across a range of social media platforms. In addition to her ever-growing popularity, Baby Ariel has been feted with a long list of honors and major media coverage. The winner of “Choice Muser” at two consecutive Teen Choice Awards, she has been profiled on CBS’ 60 Minutes, CNN, and Good Morning America, garnered the Wall Street Journal’s prestigious “Innovator Honor,” starred on the cover of Billboard, and was on both TIME’s “25 Most Influential People on the Internet” and FORBES’s “Top Influencers 2017: Entertainment” listings.  What’s more, Baby Ariel has earned a seeming endless string of award nominations, spanning the iHeartRadio Music Awards, People’s Choice Awards, Streamy Awards, Shorty Awards, and most recently, Telemundo’s  Premios Tu Mundo  Awards.

After co-headlining YouTube’s 2016 DigiTour, Ariel has only expanded her influence with the launch of her Arielmoji sticker app, as well as her ever-evolving merchandise line available to supporters and fans. More importantly, she has taken every opportunity to use her popularity to uplift and inspire. Her anti-bullying #ArielMovement was recently recognized by People Magazine for her positive impact on #hackharrassment to end trolling and internet negativity.