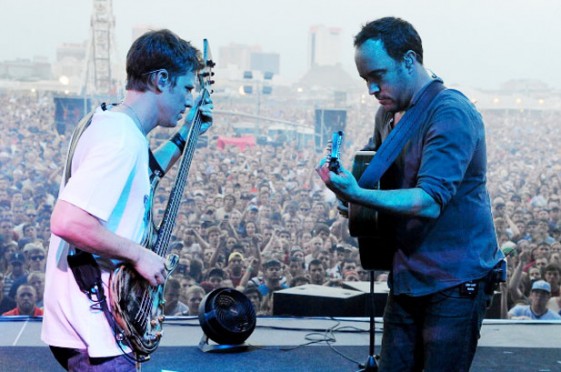 An online presale for members of the DMB Warehouse Fan Association will begin on Thursday, February 21, at 10:00 AM ET at www.warehouse.davematthewsband.com. Citi is the official credit card of the Dave Matthews Band Summer 2013 Tour. Citi cardmembers will have access to presale tickets beginning Monday, March 18, at 12:00 PM local time through Citi’s Private Pass Program. For complete presale details visit www.citiprivatepass.com. Tickets will go on sale to the general public beginning Friday, March 22, at 10:00 AM local time. For further details, see below or visit http://davematthewsband.com.

In April, Dave Matthews Band will play a trio of dates in the South that includes a headlining performance at the 2013 New Orleans Jazz & Heritage Festival on April 28. The band is touring in support of its latest album, Away From The World, which Rolling Stone named as one of the Top 50 Albums of 2012. Produced by Steve Lillywhite, the record entered the Billboard 200 at No. 1, making Dave Matthews Band the first group in chart history to have six consecutive studio albums debut atop the chart.

Reviewing a show on the group’s recent winter tour, The Boston Globe observed: “the band thrived in the moment.” Louisville.com said: “they put on an incredible show…The ensemble as a whole was tight. They hit breaks, transitions, and changes in tempo flawlessly.  Every musician in the band…is fantastic at what he does.”

Dave Matthews Band – comprising Carter Beauford (drums), Stefan Lessard (bass), Dave Matthews (vocals, guitar) and Boyd Tinsley (violin) – has sold a collective 37 million CDs and DVDs combined. The group ranked as the biggest ticket seller worldwide of the past decade and has sold over 18 million tickets since its inception.