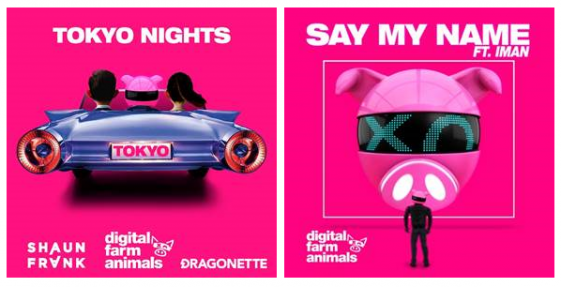 Right out of the gates, upon its global release this morning, “Tokyo Nights” has already been added to Spotify’s “New Music Friday” playlist in over 16 countries including the US, UK, Canada, Australia/New Zealand, Sweden, Italy, France, Singapore, Denmark and more.

Digital Farm Animals aka Nick Gale, the one man hit factory, has enjoyed over 2 billion streams and over 9 million monthly streams on Spotify, and is becoming one of the most sought after names in the dance and pop scene.

Digital Farm Animals comments “I’m extremely excited for everyone to hear ‘Tokyo Nights!’ As a huge fan of big 80’s synth pop, I’ve wanted to use that sound on one of my records for a long time. The song is basically about seeing something or someone that jogs your memory and takes you back in time to when things were different & easier. I hope it gives you the same nostalgic feel it gives me! I hope people love this one as much as I do and massive shouts to Shaun Frank & Dragonette!”

Shaun Franks says: “I fell in love with the Dragonette vocal the minute I heard it. She has such a signature tone. Digital Farm Animals and I worked really hard to get the production just right to compliment the Topline. We spent a lot of time playing around with analogue synths from the 80’s to add to the vibe and nostalgia of the record. I’m super excited for people to hear this record. Hope everyone enjoys it and plays it loud cruising down the beach or through the city this summer.”

Martina Sorbara of Dragonette adds: ”’Tokyo Nights’ is tune about the best kind of nostalgia.  Whether a past experience or relationship was healthy or not, to be able to look back and see it as positive for the sheer reason of existing in your unique and singular adventure that is life. It’s what makes life so gorgeous. That’s what ‘Tokyo Nights’ is about for me.”

Digital Farm Animals has been featured recently on Louis Tomlinson’s track “Back to You” with Bebe Rexha,  Alan Walker’s “All Falls Down” with Noah Cyrus, “Digital Love” featuring Hailee Steinfeld, “Only One” with Sigala, and “Millionaire,” with electronic trio Cash Cash, featuring Nelly. “Millionaire” was a massive global hit and scored Digital Farm Animals his first A List record on Radio 1 in the UK and propelled him to the next level.

As a writer/producer, Digital Farm Animals has worked with Dua Lipa, Rita Ora, Diplo, Liam Payne, Fifth Harmony, Black Eyed Peas, and MAX, to name a few. He has toured across Europe with Marshmello and The Chainsmokers last summer, and has remixed artists such as Bebe Rexha, Lily Allen, Amy Winehouse and Icona Pop.