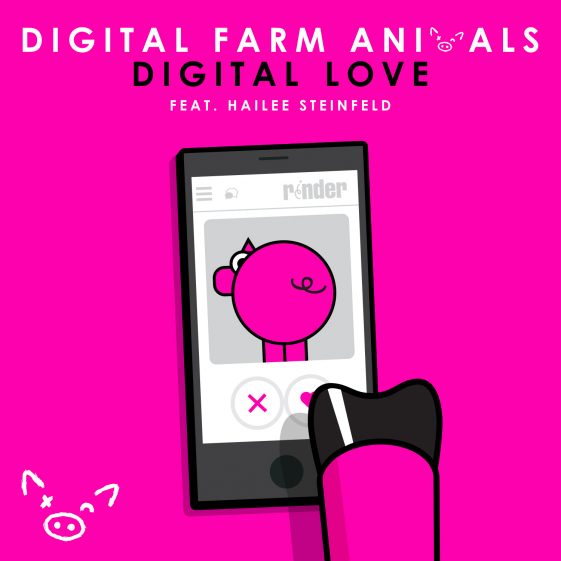 (New York- February 3, 2017) Digital Farm Animals returns today with his brand-new track, “Digital Love,” featuring pop sensation Hailee Steinfeld. CLICK HERE to listen now. Digital Farm Animals aka Nick Gale, the one man hit factory, has enjoyed over one billion streams across all of his work and is becoming one of the most sought after names in the dance and pop scene.

Digital Farm Animals said of partnering with Hailee on “Digital Love”:  “I’m a big fan of her voice so when she told me that she’d like to sing it, I was super excited! I think Hailee really brings the track to life.” The Republic Records and Academy Award-nominated actress stormed charts around the world last year with her latest hit single “Starving, which soared to the Top 5 of iTunes Top Pop Songs Chart, has landed Top 10 on Spotify’s US Top 50, is Top 20 on Spotify’s Global Top 50, and has netted over 300 million-plus Spotify streams.

Steinfeld has earned unanimous critical acclaim musically and as an actress, was recognized with two Critics’ Choice Award nominations, and a Golden Globe nomination for “Best Performance by an Actress in a Motion Picture – Musical or Comedy” for her leading role in The Edge of Seventeen.  Steinfeld’s debut EP, HAIZ, is available now.

“Digital Love” was written in Copenhagen with James Newman and inspired by a conversation the two of them had about a stint of disastrous relationships and a number of unusual experiences for Newman on mobile dating sites. Digital Farm Animals added: “Being the good friend I am, I decided to make a song out of James’ troubles. “Digital Love” is pretty reflective of a lot of people’s dating lives nowadays. We wanted it to be big and anthemic, and as with all the digital farm animals stuff (I hope), it has a tongue in cheek side to it. We felt that the story was best told as a duet since it’s from the perspective of two people in a relationship and fortunately Hailee Steinfeld wanted to work together.”

“Digital Love” follows Digital Farm Animals’ last year’s single “Millionaire,” a collaboration with electronic trio Cash Cash and featuring Nelly. The song was a smash around the world and scored Digital Farm Animals his first A List record on Radio 1 in the UK. Since the release of Millionaire, he focused on writing and producing, working with Rita Ora, Diplo, Liam Payne, Fifth Harmony, Black Eyed Peas and JP Cooper, to name a few. He also teamed up with Sigala for “Only One” and wrote and produced Dua Lipa’s “Be The One,” both of which are currently rising up the UK charts. Digital Farm Animals will be on tour across Europe later this month supporting Marshmello and The Chainsmokers.

Get it on iTunes: http://smarturl.it/iDigitalLove

Get it on Amazon Music: http://smarturl.it/DigitalLoveAmz

Get it on Google Play: http://smarturl.it/DFADigitalLoveGP