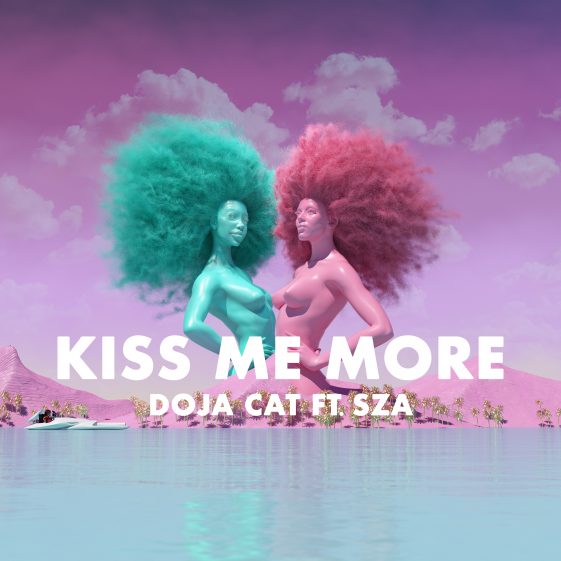 WELCOME TO PLANET HER

(April 9th, 2021 – Los Angeles, CA) – Today, global superstar Doja Cat unveils the first taste of Planet Her. “Kiss Me More” ft. SZA, the highly anticipated first single off her much buzzed about new album was written by Doja Cat, SZA, Yeti Beats, Rogét Chahayed, tizhimself and Carter Lang and produced by Yeti Beats. It arrives with an epic music video, directed by Warren Fu (The Weeknd, Kehlani), which offers the first glimpse into the brand new world Doja is creating.

Doja’s domination continues with the news that her 3rd album, Planet Her is coming summer 2021 via Kemosabe/RCA Records.

Just last month, 3-time GRAMMY nominee Doja Cat, took to the Grammy Stage for a show stopping performance of her smash hit “Say So” which was highly celebrated. She also graced the cover of V Magazine and released the music video for her runaway viral smash “Streets” which was directed by Christian Breslauer and starred actor/model Kofi Siroboe.

Born and raised in L.A., 3-time GRAMMY nominee Doja Cat made her first upload to Soundcloud in 2013 at just 16-years-old. She developed a knack for music by studying piano and dance as a kid and listening to the likes of Busta Rhymes, Erykah Badu, Nicki Minaj, Drake, and more. Soon, she went from obsessing over Catwoman (the Halle Berry version) to “crate digging” on YouTube. The budding talent taught herself Logic and how to compose on a midi controller. Signed to Kemosabe/RCA in 2014, she released her Purrr! EP and followed that with her debut album Amala in spring 2018, but it was her August 2018 release of “Mooo!” which catapulted her into the mainstream and was met with critical acclaim.

Doja Cat released her sophomore album Hot Pink in November 2019 to mass critical acclaim, the album was a platinum success with over 10.3 billion streams worldwide. Hot Pink features “Juicy” which hit #1 at Rhythm radio, “Say So” her Grammy nominated #1 smash record and “Streets”, the viral sensation that soundtracked the ‘Silhouette Challenge,’ one of the biggest TikTok trends to date.

The success of “Say So” which hit #1 on the Billboard Hot 100 and has been RIAA certified 3x platinum and streamed over 5.4 billion times catapulted Doja into global superstardom. In 2020 she took home the Best New Artist Award at the MTV VMAs, the MTV EMAs and the AMAs (where she also won the Best Female Soul/R&B Artist Award.) She has been nominated for countless awards including 3 GRAMMY Awards, 4 American Music Awards, 4 MTV VMA Awards, 2 BET Awards, and 2 People’s Choice Awards.

Doja’s creativity and showmanship as a performer have been praised time and time again, she has delivered unique and show stopping performances on nearly all the major Award Show stages including the GRAMMY Awards, the American Music Awards, the Billboard Awards and the MTV VMA and EMA Awards. Her last tour sold out in 10 minutes and she has played numerous festivals including Rap Caviar Live Miami, Posty Fest, Day n Vegas and Rolling Loud LA.

Born in St. Louis and raised in Maplewood, NJ, nine-time Grammy nominee SZA released her major label debut album Ctrl (TDE/RCA) in 2017. Revered for its raw and honest lyrics, it landed at No. 1 on Billboard’s R&B Albums chart, No. 2 on the R&B/Hip Hop Albums chart and No. 3 on the Billboard 200 chart, according to Nielsen Music. Pitchfork proclaims it “an opulent, raw R&B album that constantly tests the borders of the genre.” The now RIAA-certified 2x Platinum album received five Grammy nominations in 2018 and more than half the songs on Ctrl are now certified Platinum and Gold. Her hit song “All the Stars” with Kendrick Lamar from Black Panther: The Album, Music From and Inspired By, earned her another four Grammy nominations in 2019. SZA has won various awards since the release of Ctrl including Billboard Music Awards’ Top R&B Female Artist, BET Awards’ Best New Artist, Soul Train Music Awards’ Best R&B/Soul Female Artist and Best New Artist, MTV Video Music Awards’ Best Visual Effects for the “All The Stars” with Kendrick Lamar and NAACP Image Awards’ Outstanding New Artist in 2018. In 2019, she won NAACP Image Awards’ Outstanding Duo or Group for “All The Stars” with Kendrick Lamar and Outstanding Soundtrack/Compilation for the Black Panther Soundtrack. SZA also received Billboard’s 2019 Women in Music Rule Breaker award.

In 2020, SZA released the hypnotic track “Hit Different” featuring Ty Dolla $ign along with the stunning visual that took the internet by storm. To close out the trying year, SZA gifted fans on Christmas Day with the hopeful track “Good Days,” followed by a trippy visual released in March. The single quickly became SZA’s greatest gainer solo single release, peaking at #9 on the Billboard Hot 100 chart and marking her first time in the chart’s top ten as the main artist. To this day, SZA continues to set the standard on creativity and break records. Approaching its 200th week, Ctrl remains on the Billboard 200 chart and holds the record for the longest run for any Black female artist’s debut album.