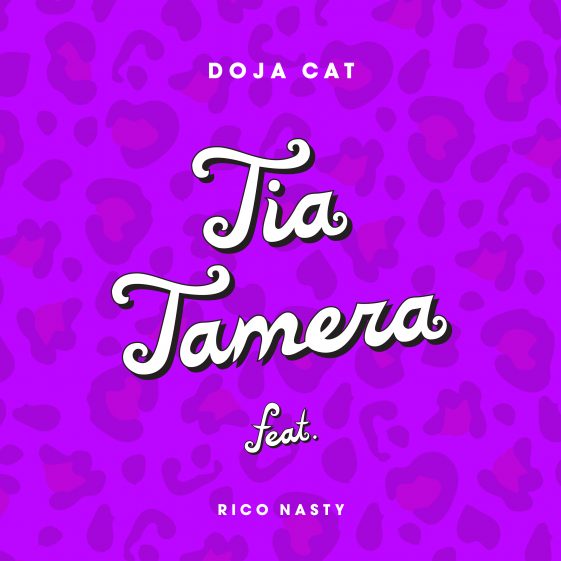 Produced by Doja Cat, the hard hitting, yet uncanny beat allows Doja to flex her lyrical abilities and implausible flow.

“Tia Tamera” is the follow up to Doja’s viral hit, “Mooo!,” the hilarious tounge-in-cheek track and visual which garnered over 10 million views in just a few days on Twitter. With countless memes and celebrity co-signs including Chance The Rapper, Katy Perry, Khalid and Chris Brown, the video and track have been streamed over 60 million times worldwide. “Mooo!” was included in various “Best Of 2018” end of year lists including, NPR, Vulture, FADER and also earned Doja a spot in V Magazine’s “The New Generation in Music” feature in their current issue which focuses on rising musicians. Click HERE to see.

Earlier last year Doja Cat released her debut album Amala, which NPR Music included in their “40 Favorite Albums of 2018.” They described the album as “…a manifesto of a young woman striving to take ownership of her craft, her image and her sexuality, mixing genres like dancehall, trap, house and R&B with a healthy dose of sass and humor…an unexpected pop gem…,” while PAPER exclaimed, “She’s about to be everywhere…. [Amala] is an eclectic mix of modern sounds with an undeniably gritty SoCal undertone throughout.” Click HERE to listen to Amala.

Born and raised in L.A.,  Doja Cat made her first upload to Soundcloud in 2013 at just 16-years-old. She developed a knack for music by studying piano and dance as a kid and listening to the likes of Busta Rhymes, Erykah Badu, Nicki Minaj, Drake, and more. Soon, she went from obsessing over Catwoman (the Halle Berry version) to “crate digging” on YouTube. The budding talent taught herself Logic and how to compose on a midi controller.

Signed to RCA during 2014, she unveiled her acclaimed Purrr! EP. Its lead single “So High” impressively racked up over 30 million cumulative streams and garnered praise from tastemakers such as Fader, Vibe, Paper, Pigeons & Planes, and more. Averaging nearly half-a-million monthly listeners on Spotify, she further engaged that growing fan base by touring with the likes of Lizzo, Father and Theophilus London. Along the way, she assembled what would become her debut album, Amala.

Cooking up vibrantly, candy-coated beats, dropping bars doubled-up on double entendre,and singing with claws out, Amala unlocks a sweetly sexy world soundtracked by wild hip-hop, twisted pop, and smoked-out R&B. Asserting a feline-esque dominance and a style that can only be described as every color in a box of crayons, Doja Cat’s unapologetic charisma, charm, and confidence immediately take center stage.

In August 2018, she released what would become her viral hit “Mooo!” which enjoyed over 10 million views on YouTube and Twitter in just a couple of days and was met with critical acclaim. With co-signs from Chance The Rapper, Katy Perry, Chris Brown and J.Cole among others, “Mooo!” propelled Doja Cat forward and added many fans to her already feverishly loyal fan base. She went on to embark on a nearly sold out headlining North American tour this past fall and is gearing up for new music coming soon.

Rico Nasty is not your average female rapper. Born Maria Kelly, Rico is coming out of the DMV with her own trademark sound, “Sugar Trap” that matches her colorful attitude, fresh style, and outlandishly creative mind. Her first single iCarly received over 920,000 YouTube views in just seven months. She followed that with “Hey Arnold,” a song that got the attention of fellow next generation superstar Lil Yachty, who jumped on the remix to the song and from there her profile has steadily risen.

2017 proved to be a landmark year for the rising star with the release of her two mixtapes “Tales of Tacobella” (May 2017) and her most recent follow up “Sugar Trap 2” (October 2017) receiving national recognition from Complex, XXL, Fader, Noisey and more. The latter features what some may argue to be her biggest smash yet, “Poppin”- which can be found on HBO’s hit series “Insecure.” To conclude this stellar year, Rico Nasty hit the road for her very first headline tour across 9 cities!

2018 has been a true breakout year for Rico, from notable claims by Billboard who claimed, Rico Nasty is “One Of The 10 Hip Hop and R&B Artists To Watch in 2018” to her embarking on her first major festival run at this year’s Rolling Loud Festival, Afropunk, Mala Luna and more to landing a cover spot on The Fader’s Summer Music Issue. Fans also received more anthems + compelling new visuals from Rico since the release of her highly anticipated mixtape, Nasty – that was accompanied by another sold-out headline tour across North America.