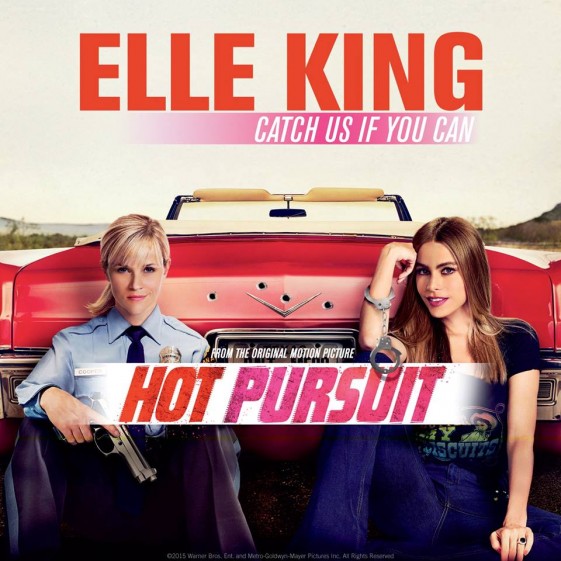 Check out Elle King in the song, “Catch Us If You Can”, featured in the new movie, Hot Pursuit starring Reese Witherspoon and Sofia Vergara in theaters May 8th! Get the song now on iTunes, Amazon Music, and Google Play. You can also stream it now on Spotify!

Having just released her critically acclaimed debut album LOVE STUFF in February, Pop, Blues, and Rock’n’Roll singer Elle King today releases a brand new track entitled “Catch Us If You Can” which is featured in the upcoming film Hot Pursuit starring Reese Witherspoon and Sofía Vergara, in theaters May 8th. “Catch Us If You Can” is available everywhere today: Click here to listen to the track now. Produced by David Bassett who also worked on Elle King’s debut album, the song was written by Grammy Award-winning artist, Hillary Scott of Lady Antebellum along with Charlie Peacock, Sara Chrenow and Todd Clark.

Jon Pareles of The New York Times describes Elle King as “a sassy, hard-drinking, love-’em-and-leave-’em hellion with bad tattoos and a broad pedigree across rock, pop and country. She has Adele’s determination and Joan Jett’s stomp, Brenda Lee’s high-voiced bite and some AC/DC shriek.” The Wall Street Journal calls her voice “a powerful instrument that reflects the influence of Aretha Franklin and rockabilly pioneer Wanda Jackson,” and Teen Vogue declares her “Blond and boisterous…music’s newest hot chick.”

Elle King will be joining James Bay as the opening act on select dates of his sold out tour starting May 7th in Denver, Colorado. She will also be performing at Lollapalooza, Bonnaroo, Hangout Fest, Beale St. Music Festival and Squamish Valley Music Festival in the coming months. Elle has toured with Of Monsters and Men, Train, Ed Sheeran, and many others.