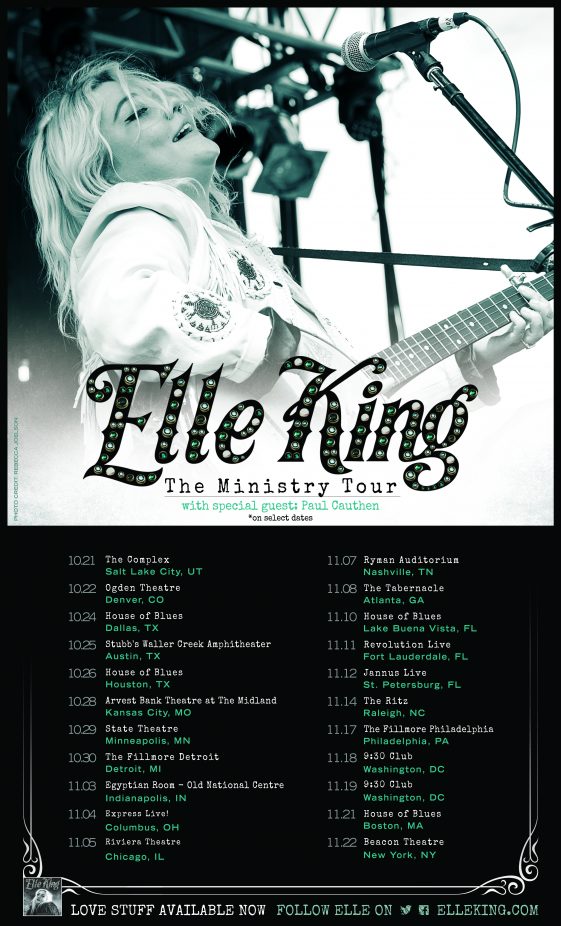 (New York – September 30, 2016) — Pop, blues, and rock’n’roll singer Elle King announces her newly named headlining Ministry Tour today. Since King is basking in the glow of being engaged to be married, she decided to spread the love with her fans. During each live show, King will bring one couple to the stage to officiate their wedding or renew their vows. Open to everyone, fans interested in participating should visit: http://bit.ly/2dlOfnw to submit to be considered. Fans will then be directly contacted by the team for further correspondence. King originally announced the special tour concept on her Instagram feed. Click here to view her post.

The tour kicks off on October 21st in Salt Lake City with stops in major cities, including Atlanta, Nashville, New York City and more (find full itinerary below). King will be joined by Paul Cauthen on select dates and tickets and VIP packages are available for purchase now via http://www.elleking.com.

Elle King recently released her track “Good Girls,” which she performed on Good Morning America Summer Concert series and is featured on Dierks Bentley’s massive hit “Different For Girls”, which reached #1 on Billboard’s Country Airplay chart last week.  King is currently supporting Dixie Chicks on their nationwide arena tour which wraps in early October. King’s set received rave reviews with The Quad City Times proclaiming, “Ms. King gave a blazing, typically fearless 40-minute set to open…Her raspy, searing, and soaring wail poured out her heart. What a tremendous, tumultuous set of pipes she’s got” and The Lantern describing her performance as “…[perfect]…her deep and growling vocals and unpolished stage presence were reminiscent of Janis Joplin…watching King be so openly grateful…and playing this size of venue…was infectious.”

Elle King has taken the world by storm with the release of her Gold-certified debut album LOVE STUFF last year. Her hit single “Ex’s & Oh’s” was nominated for 2 Grammys and 2 Billboard Music Awards, was certified double platinum, and she made chart history, becoming the second female artist in 18 years to reach #1 at Alternative Radio, following Lorde’s #1 with “Royals” in 2013.  Her single also claimed the #1 spot on the AAA Chart, #1 at Hot AC, and #1 spot on the Billboard “Hot Rock Songs” with “Ex’s & Oh’s, becoming the 4th female led act/artist to top this chart in its 6 year history. Elle released the video for her single “America’s Sweetheart” and performed “America’s Sweetheart” on The Tonight Show Starring Jimmy Fallon, The Ellen DeGeneres Show, and The Late Late Show with James Corden. She has received much critical acclaim — Jon Pareles of The New York Times described her as “a sassy, hard-drinking, love-’em-and-leave-’em hellion with bad tattoos and a broad pedigree across rock, pop and country. She has Adele’s determination and Joan Jett’s stomp, Brenda Lee’s high-voiced bite and some AC/DC shriek.”  Elle has been featured by The Wall Street Journal, Teen Vogue, People Magazine, USA Today, and many more.

For the latest on Elle King, please visit: