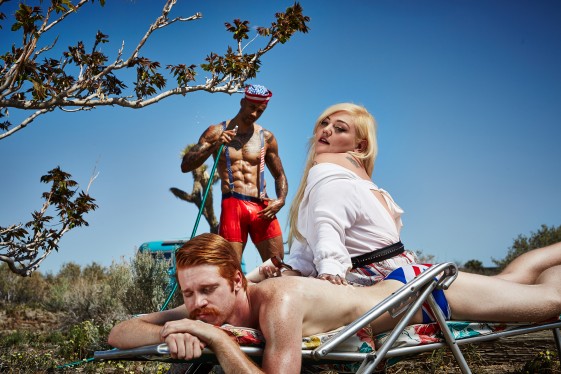 In this cheeky video playfully directed by Michael Maxxis, Elle is rightfully the queen of her domain, filmed on location in the desert outside of Los Angeles.

“Ex’s and Oh’s” Is the first single from her critically-acclaimed debut album LOVE STUFF. Jon Pareles of The New York Times describes Elle King as “a sassy, hard-drinking, love-’em-and-leave-’em hellion with bad tattoos and a broad pedigree across rock, pop and country. She has Adele’s determination and Joan Jett’s stomp, Brenda Lee’s high-voiced bite and some AC/DC shriek.” The Wall Street Journal calls her voice “a powerful instrument that reflects the influence of Aretha Franklin and rockabilly pioneer Wanda Jackson,” and Teen Vogue declares her “Blond and boisterous…music’s newest hot chick.”

Elle has also just released a brand new song “Catch Us If You Can” featured in the the film “Hot Pursuit” in theaters May 8th featuring Reese Witherspoon and Sofía Vergara.

Elle King will also be on tour as the opening act for select dates on James Bay’s sold out tour starting next week on May 7th in Denver, Colorado. She will also be performing at Lollapalooza, Bonnaroo, Hangout Fest, and Squamish Valley Music Festival in the coming months. Elle has toured with Of Monsters and Men, Train, Ed Sheeran, and many others.

Link to watch her video: elleking.vh1.com

About Vh1: VH1 delivers the ultimate mash-up of music, pop culture and nostalgia for adults who still want to have fun. VH1 is available in 99 million households in the U.S. VH1 also has an array of digital channels and services including VH1 Classic, VH1 Soul, the VH1 App, VH1.com and @VH1, the hub for all things music and pop culture. Fans may also access current and retro VH1 programming via the VH1 App, the network’s three-in-one video, new form content and co-viewing app, available for free on iOS and Android platforms. VH1 is a unit of Viacom Inc. (NASDAQ: VIA, VIAB), one of the world’s leading creators of programming and content across all media platforms. For more information, go to www.vh1press.com, VH1.com, or the VH1 Facebook page. Follow us on Twitter @VH1PR.