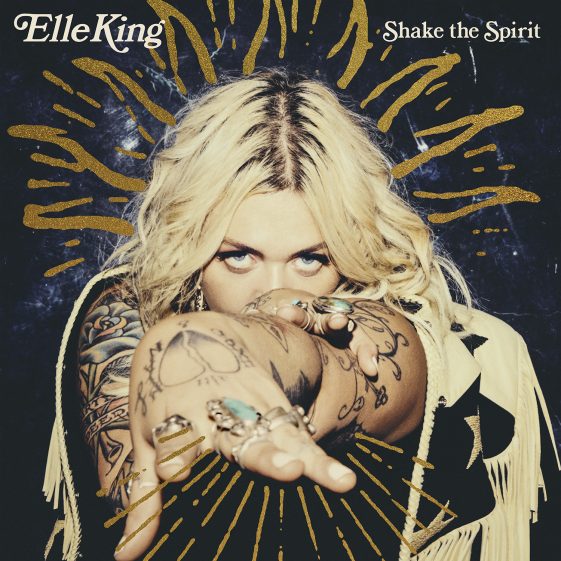 “SHAKE THE SPIRIT” TOUR TO HIT 12 CITIES THIS FALL

What the Press is Saying About Elle King & SHAKE THE SPIRIT:

“Best Badass…Her charisma and the songs’ catchiness made the set delectable, and the possibility of new music from her tantalizing-– Rolling Stone (live show review at Seven Seas Festival)

“The song, a shuttering, shimmying blast of pop …a brazen invitation to give in to temptation…she sings in a near growl.” – Rolling Stone

“… mix(es) a bluesy tendency with her soulful tones, full of attitude and a catchy pop sensibility underlying its hard edges…give(s) her voice an extra raspy quality, making her sound distinctively her own.”- Time Magazine

“…the soulful Elle King captured hearts across the world with her sassy, lovelorn …‘Ex’s & Oh’s’… ‘Shame’ (is) a brassy tune about bad-girl antics…unstoppable series of hooks, as if daring us to feel shame for loving a song this wickedly good.” – Paper

“If you thought the Black Keys had cornered the market on blues-based stompers, she’s here to change your mind.” – Refinery 29

Elle recently released a short trailer for fans about the making of SHAKE THE SPIRIT, offering more detail on the emotionally challenging, yet artistically productive period of her life. – check it out HERE.

Speaking about the album, Elle explains: “I decided to call it ‘Shake The Spirit’ because I was shaken to the core over the last year and a half. I was literally talking to ghosts. But making the album not only changed my life, it saved my life. It’s like when you see somebody who is struggling, you want to shake them. Putting this record out is like shaking myself awake.

A select number of fans will be able to hear the new music live for the first time when Elle King & The Brethren present the SHAKE THE SPIRIT TOUR with stops in intimate venues across 12 major markets in the US, UK and Canada behind the album’s release.  Jon Pareles of The New York Times describes Elle as “a sassy, hard-drinking, love-’em-and-leave-’em hellion with bad tattoos and a broad pedigree across rock, pop and country. She has Adele’s determination and Joan Jett’s stomp, Brenda Lee’s high-voiced bite and some AC/DC shriek.” Rolling Stone writes of her set at the Seven Seas Festival earlier this month: “Her charisma and the songs’ catchiness made the set delectable,” and The Kansas City Star adds: “riveting… King growled like the rockabilly pioneer Wanda Jackson…and evoked the R&B great Etta James.” Elle will be joined on tour by special guest The Cordovas. Visit www.elleking.com for more details.

Upon its release, lead single “Shame,” was #1 most added at AAA Radio, Top 10 on Spotify’s New Music Friday playlist and Top 10 on iTunes Alternative Songs Chart. “Shame” is a fun, devilish track that embraces bad influences: “I can make you better babe, Come pray with me, Get saved with me….I’m a fire, just a spark under your halo.”  She celebrated its release with an electrifying performance on “The Late Show with Stephen Colbert” – watch it HERE.  The video for “Shame” can be seen HERE. Elle co-wrote “Shame” with Tim Pagnotta who produced the single.   In addition to single “Shame,” she released new track “Good Thing Gone,” a soulful, show-stopping ballad written by Elle and her band The Brethren and produced by Elle with Matt Pence in his Denton, TX studio The Echo Lab.  Click HERE to listen to “Good Thing Gone” and HERE to watch a live performance of “Good Thing Gone (Live from London).”

Elle’s debut album Love Stuff, a sultry, badass mix of rock and roll, blues, and country, with a twinge of pop, features the breakthrough single “Ex’s & Oh’s,” which earned her two Grammy nominations and was certified double platinum. The track, about leaving behind a string of brokenhearted exes, hit No. 1 on Billboard’s Hot Rock Songs Chart, and topped the AAA, Hot AC, and Alternative Radio charts, leading King to become the second female artist in 18 years to reach No. 1 at the latter format.  She was also featured on Dierks Bentley’s Grammy-nominated No. 1 Country Airplay hit “Different For Girls” (she performed it with Bentley at the CMA Awards and took home an award for “Musical Event of the Year”). King also performed for President Obama in honor of Mavis Staples at the 2016 Kennedy Center Honors.