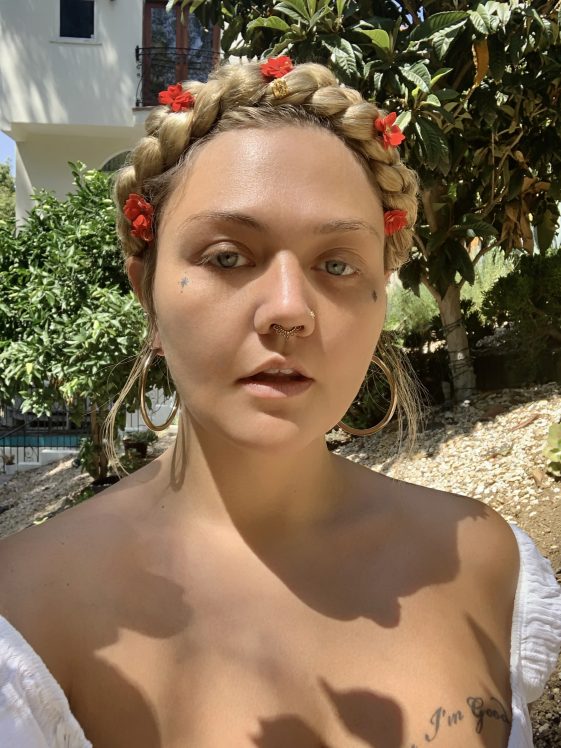 Watch the video for “The Let Go”: https://smarturl.it/EKTheLetGo

Listen to the EP: https://smarturl.it/EKInIsolation

“So many questions have begun to blossom within me through this time of isolation. From the rug being ripped out from underneath, to the burst of a new idea…isn’t the world strange?  When we think of the state of it, have we upheld the promise to love and nurture it? What is it that’s going to carry us through this time of isolation? How do we push through fear? What is it that we are afraid of? Why do we fear being alone? Is it because that fearful, lonely driven voice grows so loud in the absence of others? Or do we fear ourselves? When you look in the mirror what do you see? How loud does that voice become? What if you held a mirror up to your Spirit? Would you be able to see your beautiful light then? Within your own Self there is a volume dial. You are your own audio tech. You can turn down and tune out all of those fears that keep you from growth, potential, true power, real change. Fear is just static. Pain is temporary. The past is the past. What are you going to do with NOW?!? Every answer that you seek is within you. Trust yourself. Let your own light guide the way, and let go.” – Elle King

Click HERE to watch the “at home” performance video filmed in her living room for “The Let Go” that premiered on Rolling Stone.

Elle has recently experienced a massive streaming resurgence with her outrageously fun take on “My Neck My Back” featured in the Netflix film The Wrong Missy, and her most recent single “Baby Outlaw” is featured in the Charlize Theron-starring film The Old Guard released today, also on Netflix.

Multi-platinum and award-winning recording artist Elle King has enjoyed over 1.2 billion streams worldwide. Her sophomore critically acclaimed album Shake The Spirit was released in late 2018 and follows her debut album Love Stuff, a sultry, badass mix of rock and roll, blues, and country, with a twinge of pop. Love Stuff introduced the world to Elle King and featured her breakthrough single “Ex’s & Oh’s,” which earned her two GRAMMY nominations and was certified double platinum. Her breakthrough single hit No. 1 on Billboard’s Hot Rock Songs Chart, and topped the AAA, Hot AC, and Alternative Radio charts, leading King to become the second female artist in 18 years to reach No. 1 at the latter format. Additionally, she’s collaborated with Dierks Bentley on “Different for Girls,” their #1 Country Airplay chart topper and CMA Award -winning single for “Musical Event of the Year.”

Her lead single off of Shake The Spirit “Shame,” marked her fourth radio #1 single and led Elle to become the only act in history to have scored number 1 singles on the Adult Pop Songs, Adult Alternative Songs, Alternative Songs and Country Airplay charts.  Her follow up single “Baby Outlaw” achieved Top 15 charting at AAA Radio.  Rolling Stone wrote of her Austin City Limits live set: “Elle King is a little bit country, a little bit rock n’ roll, but ultimately, she’s punk as fuck.” Variety wrote of her Philadelphia Shake The Spirit tour date “…King churned the clotted cream of punkish country, raw R&B, crotchety rock and deep blues into rich, buttery musical drama with her band, The Brethren… (she) belted, crooned, purred, sauntered and swaggered her way through a tautly rocking set…one thing became very clear: nearly every song that came before (the finale) was equally contagious, catty-cool, and hit-worthy.”