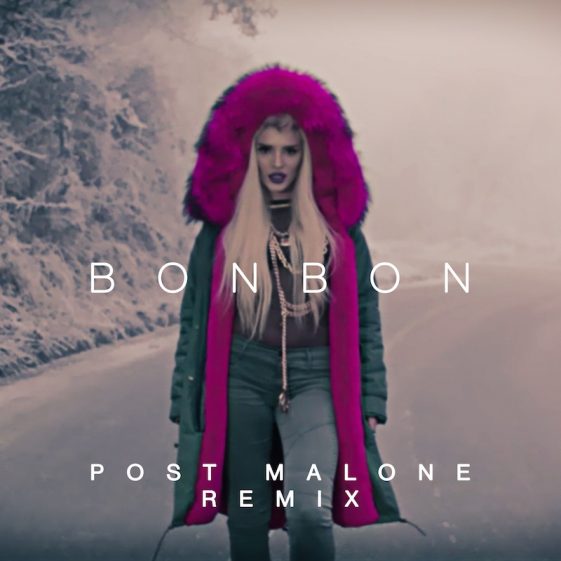 THE BONBON EP OUT NOW

Today, Albanian singer-songwriter, Era Istrefi, releases the Post Malone remix of her hit single, “Bonbon”.  The track premiered yesterday as a “World Record” on Zane Lowe’s Beats 1 Radio Show.  Following the radio show, The Source also premiered the track (Click HERE), and said, “As Malone creeps into the remix, the duo creates an enticingly smooth sound guaranteed to take over the airways.”

“Bonbon (Post Malone Remix) is also included in The Bonbon EP, which is out today and available at all digital retail providers.  Along with the Post Malone remix, The Bonbon EP includes both the original and English versions of the song, as well as remixes by Marshmello and Luca Schreiner.  See full track listing below.

Era Istrefi first rose to fame in 2013 with the release of her debut single “Mani për money” which was quickly followed by similarly successful records “A po don” and “E dehun.” In 2014, the songstress won three Videofest awards (Albanian Music Awards), including “Best New Artist” for her work in 2013. Last year Era’s release “Njo si ti” gained worldwide traction with over a million views on YouTube in a week, and her release “Shumë pis” became an instant summer hit. Era received praise for her latest single “Bonbon” with Billboard noted, “…Bonbon swiftly went viral […] piloted by a reggae aesthetic akin to Major Lazer, Istrefi’s voice drew frequent comparisons to pop stars Rihanna and Sia” Popcrush also said, “the buildup culminated in January 2016, when the singer-songwriter released “BonBon,” an EDM banger with tropical beats and Eurodance appeal, not so far removed from the pulsating club works of Cascada or Basshunter.”  With her quick rise to fame overseas with and the release of the English version of “Bonbon”, there is no doubt this Albanian songstress is a guaranteed hit maker.

To Buy or Stream The Bonbon EP:

For more information on Era Istrefi: