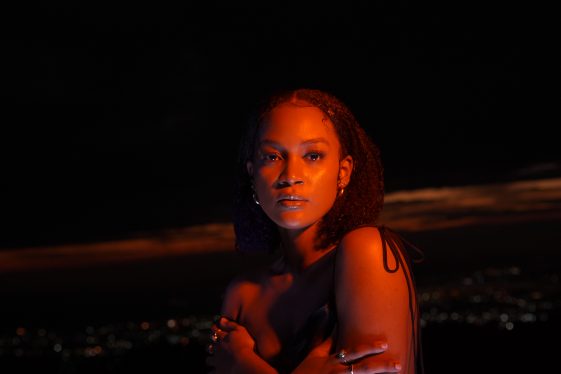 The Opening Single From Her Debut EP The Golden Hour  via In.Digg.Nation Collective/Six Course Music/RCA Records

[New York, NY – April 29, 2021] Boasting the best of both worlds – “bad gyal” and “fully-educated” – the rising songstress Jaz Elise proclaims why she is “a vibe” on her new visualizer for “Elevated,” out today. The Jamaican-born singer lures in the listener showcasing her choreography skills in this stark monochromatic video directed by Rayon McClean. Jaz  Elise and her dancers don crisp white attire while synchronizing their movements against the matching spray-painted speaker boxes.

“I was so nervous to sing Elevate at first. It was a ‘how dare I say this’ moment, but we as women really need to have those moments to remind ourselves who we are and how good we are! ‘I’m a vibe nutn cya replace me’ is what I want every young person to be singing in the mirror when they see themselves. It’s a song uplifting yourself and reminding us how much we’re worth. Self worth and self esteem needs to be high for all of us and hopefully this song can make every girl feel like that b—-! Love yourself and remember to let anyone who wants any of your time to know that you value yours,” Jaz Elise declares.

“Elevated” is the opening track from Jaz Elise’s debut EP The Golden Hour, released in early March. As the newest member of In.Digg.Nation Collective’s roster, the record label and management company founded by Grammy-nominated artist Protoje, she joins Lila Iké, Sevana and Protoje in the label’s joint venture with Six Course Music and RCA Records.

Jaz Elise has now revealed visuals for all of her EP’s songs except the closing track “Breathe,” which will follow shortly. The Golden Hour is the perfect combination of ethereal R&B and soulful reggae filled with breezy confident melodies, positive vibrations and sultry slow burns throughout its seven tracks. Her confident yet supple vocals and honest songwriting float over spacious and thoughtful instrumentation composed by a variety of Jamaican producers including IzyBeats, Natural High, J.L.L., iotosh, Ziah .Push and Protoje.  The EP features two of her contemporaries, including the soulful singer Mortimer on “After 3” and the distinctive voice of dancehall artist Govana on “Fresh & Clean.”

Listen to The Golden Hour EP:

See what the critics are saying about The Golden Hour:

“The Golden Hour is a hell of an introduction for Jaz Elise, and it’s a prime example of how much innovation has been happening within reggae recently”  – Brooklyn Vegan

“This debut is greatness, hands down…EP hums with a dynamic diversity that seems to become the brand identity of the In.Digg.Nation – the sound of 21st century Jamaica.”

“On her debut EP, Kingston, Jamaica singer Jaz Elise blends R&B and reggae seamlessly in less than a half-hour”   – Okayplayer

Jaz Elise & Mortimer Team Up On Visualizer For “After 3”