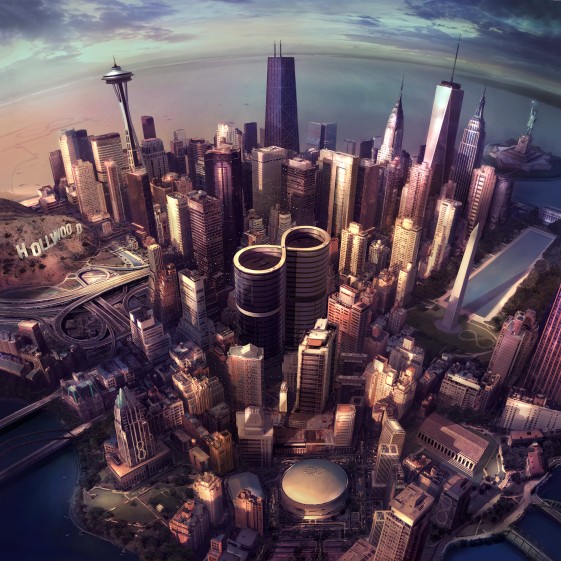 Fresh off winning the fans’ vote to be named Best International Act at the NME Awards while in the thick of a massive Australia/New Zealand stadium tour, Foo Fighters have confirmed the details of the DVD/Blu Ray and iTunes release ofFoo Fighters: Sonic Highways:

The critically acclaimed and award-winning HBO docuseries directed by Foo Fighters’ own Dave Grohl, will receive a deluxe DVD/Blu Ray treatment and digital release via iTunes on April 7. Assembled with the same passion that went into the musical odyssey that produced both the series and the current Foo Fighters album that shares its title, the Sonic Highways DVD/Blu Ray package features bonus footage filmed during each of the eight episodes-plus extended interviews with President Barack Obama, Dan Auerbach of the Black Keys, Chuck D of Public Enemy, Billy Gibbons of ZZ Top, Gibby Haynes of the Butthole Surfers, Joan Jett, Ian Mackaye of Fugazi and Minor Threat, Dolly Parton, Carrie Underwood and Joe Walsh.

Pre-orders for the Foo Fighters: Sonic Highways DVD/Blu Ray will be live beginning March 9 at Foofighters.com and via iTunes. Fans can also purchase DRM free files direct from the band at http://buy.foofighters.com/

Described by Grohl as a love letter to the history of American music, Foo Fighters: Sonic Highways followed Grohl and fellow Foo Fighters Taylor Hawkins, Nate Mendel, Chris Shiflett and Pat Smear as they recorded each song in a legendary studio in one of eight iconic American musical capital cities-Chicago, Washington DC, Nashville, Austin, Los Angeles, New Orleans, Seattle and New York–tapping into the deep musical heritage and cultural fabric of each locale: experiencing firsthand how each region shaped these musicians in their formative years, and in turn the impact those people had on the cultural fabric of their hometowns. The resulting eight songs were released as the eighth Foo Fighters album, each song featuring local legends sitting in, with every lyric written in an unprecedented experimental style: Dave held off on putting down words until the last day of each session, so as to be inspired by the experiences, interviews for the HBO series, and other local personalities and experiences that became part of the process.

With the DVD/Blu Ray release of Foo Fighters: Sonic Highways, the journey is expanded and enriched, with virtually every word and note captured and shared with the viewer. If Grohl’s 2013 feature film directorial debut, the Grammy-winning Sound City, was a celebration of the human element in the creation and recording of music, Foo Fighters: Sonic Highways is, in its director’s words, “a chronicling of a journey to unravel the fabric of our musical identity… not only the making of our most ambitious album… this is Sound City on steroids.” Dave’s unequaled passion for both the music he creates and the music that inspires its creation once again fuels the type of honest and trusting musician-to-musician exchange that made Sound City a critical and commercial smash-and that makes  Foo Fighters: Sonic Highways required viewing for music fans for generations past, present and future.