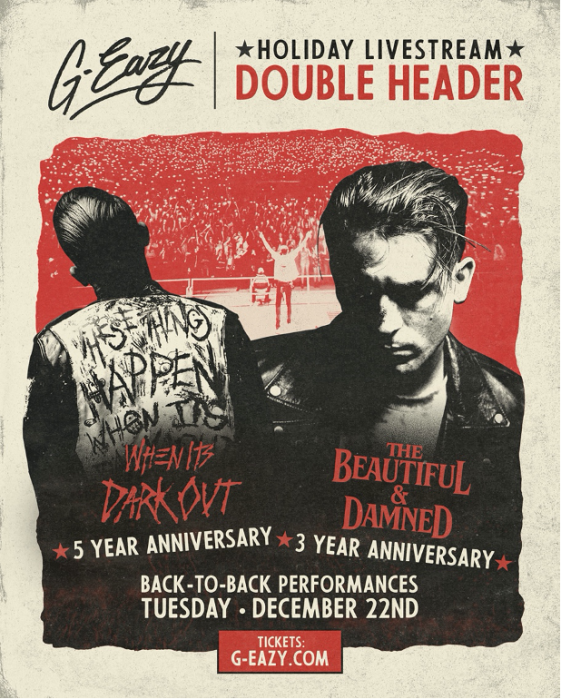 BACK-TO-BACK PERFORMANCES FOR THE ANNIVERSARY OF

WHEN ITS DARK OUT + THE BEAUTIFUL & DAMNED

WILL RELEASE DELUXE ALBUM VERSIONS INCLUDING NEVER BEFORE HEARD TRACKS

December 10, 2020 – Today, multi-platinum selling superstar G-Eazy announces a one-of-a-kind double header livestream event set to take place on Tuesday, December 22, in celebration of the 5-year anniversary of When It’s Dark Out and the 3-year anniversary of The Beautiful & Damned. Watch the teaser trailer here.

The hitmaker will perform back-to-back sets of hits from each of the respective albums, in addition to some never-before-heard tracks. G will also be releasing Deluxe versions of each of the albums, which will include brand new songs. The Deluxe version of When It’s Dark Out will be released tonight with two new tracks featuring Rick Ross, and Goody Grace.

Fans can purchase a single ticket for $15 dollars, or $25 for both shows. Tickets for the livestream, presented by NoCap, are available for purchase now here.

In other big news, G-Eazy has officially announced his new record label, Red Stairway. The label’s first signee and fellow Bay Area rapper, Kossisko, will release his biggest single yet this Friday, December 11 via Red Stairway, titled “World of Trouble.”

The slew of announcements follow G’s praised performance alongside blackbear on Jimmy Kimmel Live! where they performed their latest hit “Hate the Way.”

NoCap, the brainchild of Roxy Theater co-owner and musician Cisco Adler along with an all-star list of partners in the music and tech industries, is both a platform and promoter of venue-based livestream concerts giving fans around the world access to intimate live performances with unlimited capacity. With its easy-to-use text-based ticketing technology and custom concert streaming solution, NoCap is providing a much-needed lifeline for artists, crews and venues suffering during the Covid-19 pandemic that will remain a viable outlet post pandemic while becoming the new general admission creating unlimited profit potential for a new live music model. NoCap gives fans globally a chance to experience live shows by top-tier talent in storied venues, including The Roxy (Los Angeles), Belly Up (Solana Beach, CA/Aspen, CO), SOhO (Santa Barbara), Sony Theatre ( NYC ) and even Drive-In Concert Venues across the country, from home or on the go with visually stunning concert-quality sound, creating unforgettable performances. For more info, visit www.nocapshows.com.