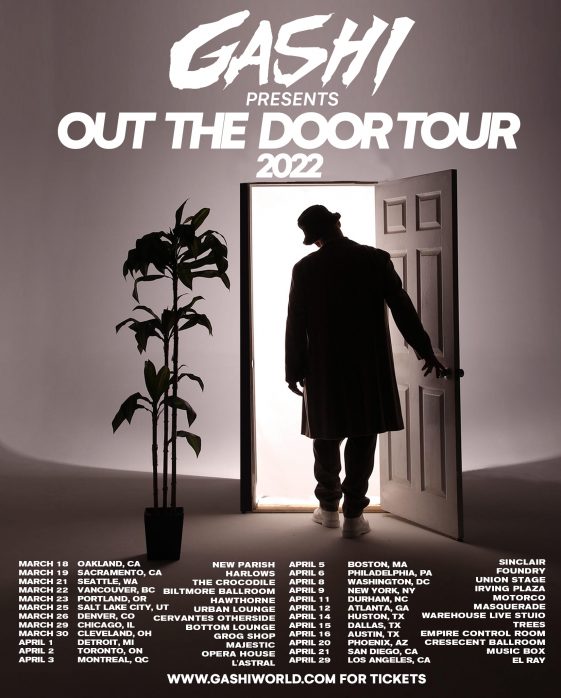 TICKETS FOR THE TOUR ON SALE TO GENERAL PUBLIC JULY 23RD

(July 19, 2021 – NY, NY) – Genre-bending artist GASHI announces his 2022 Out The Door North American tour today.  The 24-date tour will start in Oakland, CA on March 18th and end in San Diego on April 21st.   Excited to get back on the road GASHI will bring his live energy to the stage this summer at E11EVN Miami on July 16th and joining Wiz Khalifa in Chicago on July 17th.

Tickets for the tour will go on sale to the general public on July 23rd at 10:00 AM Local Time with various presales starting as early as July 20th.  For artist and partner presales and more information please visit www.gashiworld.com.

Born in Libya, GASHI spent much of his young life as a refugee, moving from country to country.  His family eventually settled in Brooklyn, NY, where he was introduced to music at a very young age.  GASHI absorbed a melting pot of musical influences throughout his youth, resulting in the formation of his own unique sonic palette that blends together different genres of music.  His dynamic sound has allowed GASHI to collaborate with a wide range of talents ranging from Chris Brown to Travis Scott.  In the last couple of years, he released two studio albums album, sold out venues across the globe, and has accumulated over 720 million streams with over 130 million video views worldwide.

Last summer, GASHI released his sophomore album 1984 which saw GASHI exploring and harboring new sounds that brought you back to his favorite time – the 80’s and featured his breakout hit “Mama” with the legendary Sting. He also released his documentary GASHI: Now You Know (watch here) and performed his first ever livestream performance featuring tracks from the 1984 album (watch the performance here).