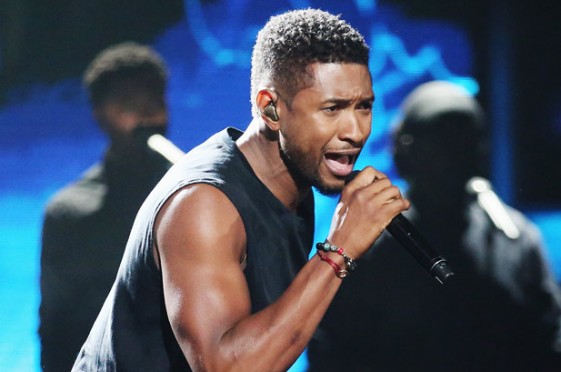 New York, NY (July 9, 2014) – MTV today announced via its various social media channels that Grammy® Award winner, multi-platinum selling, recording artist Usher will make a triumphant return to MTV and the VMA stage during the “2014 MTV Video Music Awards” live from the Forum in Inglewood, CA on Sunday, August 24 at 9pm ET/PT.
A VMA mainstay, Usher has delivered some of the show’s most high octane and memorable performances including 2010’s stunning combo of “OMG” and “DJ Got Us Fallin’ in Love,” 2004’s mashup of “Confession” and “Yeah” (featuring Ludacris and Lil Jon).

“Performing live is the purest form of musical expression and I am damn happy to return to the VMA stage with new music!” – Usher

Hot on the heels of releasing their self-titled debut album, Australian pop-punk band and upcoming MTV Artist to Watch 5 Seconds of Summer, also known as Luke Hemmings, Michael Clifford, Calum Hood and Ashton Irwin, will take the VMA stage for the first time. The teen sensations have been wowing live audiences worldwide and will surely bring the audience to their feet on this night.

Usher and 5 Seconds of Summer join previously announced Ariana Grande, who will also be performing on the VMA stage for the first time. Additional performers will be announced at a later date.

The “2014 MTV Video Music Awards” nominations will be announced on Wednesday, July 16.

One of the best-selling musical artists in history, eight-time Grammy winner Usher Raymond is set to release his 8th studio album later this year, featuring his current single “Good Kisser.” Having released his first album 20 years ago, Usher has sold over 50 million albums worldwide. Billboard named Usher the #1 Hot 100 artist of the 2000s decade, and the second most successful artist of the 2000s decade, His 10-million-selling 2004 album “Confessions” enjoying its 10th anniversary this year, is ranked as the top solo album of the decade. Usher has attained nine Hot 100 Number One hits and 17 Hot 100 Top Ten singles and has appeared everywhere from Broadway to the Super Bowl. Usher also just wrapped his second season as a coach, having mentored the winner of the Emmy-Award winning hit reality TV show “The Voice.” He will also star as boxer Sugar Ray Leonard in the upcoming film “Hands of Stone,” a biopic of boxer Roberto Duran played by Edgar Ramirez and costars Robert De Niro due out in 2015. Realizing that with success comes responsibility; Usher has also proven to be a major philanthropic force. Founded in 1999, his New Look Foundation empowers youth from impoverished communities to become leaders. In recognition of his accomplishments, Usher has been honored by the Boys & Girls Clubs of America, the Trumpet Foundation, Do Something, the NAACP, and as the 2010 Ford Freedom Award Scholar. Usher’s business ventures include a best-selling line of fragrances, and a business venture with RBMG (Raymond Braun Media Group), home to superstar Justin Bieber.

5 Seconds of Summer is an Australian pop-punk band. The quartet’s debut self-titled album, due July 22 on Capitol Records in the U.S., peaked at No. 1 on iTunes in 69 different countries when released. Formed in Sydney in 2011, the band consists of Luke Hemmings (lead vocals, guitar), Michael Clifford (guitar, vocals), Calum Hood (bass guitar, vocals) and Ashton Irwin (drums, vocals). Their EP She Looks So Perfect debuted at No. 2 in the U.S. on Billboard’s Top 200 Albums chart and No. 1 on iTunes in over 50 countries. The band recently completed sold-out headline tours in the UK, Australia and North America and is currently on a worldwide stadium jaunt with One Direction.