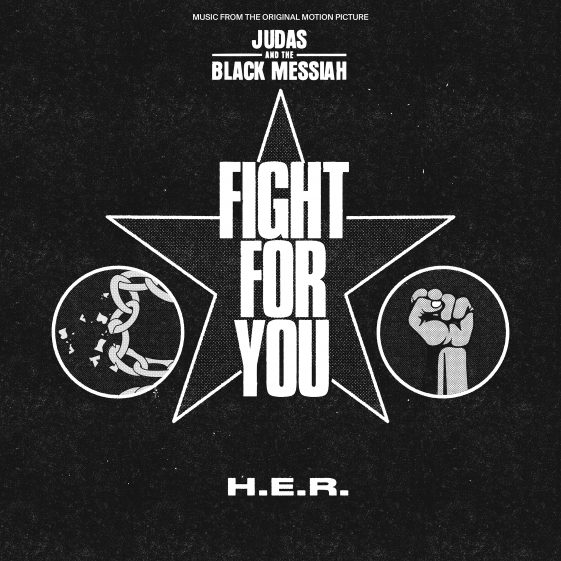 Judas And The Black Messiah

JUDAS AND THE BLACK MESSIAH: THE INSPIRED ALBUM,

ON “THE LATE SHOW WITH STEPHEN COLBERT”

Featured on New Music Daily on Apple Music and available at all digital service providers, “Fight For You” is also the first single from the Judas and the Black Messiah: The Inspired Album, which will include songs from Nas, SiR, A$AP Rocky, Dom Kennedy, White Dave and more.  The album will available everywhere on February 12 via RCA Records.

All the Smoke in the air

Feel the hate when they stare

All the pain that we bare

All we got is a prayer

It was all in their plans

Wash the blood from your hands

Ahead of her Super Bowl LV performance this Sunday (2/7), H.E.R. returns to The Late Show with Stephen Colbert for a special television debut performance of “Fight For You” tonight (2/4) at 11:35pm ET on CBS.

ABOUT “JUDAS AND THE BLACK MESSIAH”

Warner Bros. Pictures presents, in association with MACRO/Participant/BRON Creative, a MACRO Media/Proximity Production, a Film by Shaka King, “Judas and the Black Messiah.” The film will be released in the U.S. in theaters and on HBO Max on February 12, 2021, and available on HBO Max for 31 days from theatrical release. Internationally, it will be released in select theaters beginning February 12.  It is distributed worldwide by Warner Bros. Pictures and has been rated R for violence and pervasive language. www.judasandtheblackmessiah.com

In a short period of time, H.E.R. has accrued nearly 6 billion combined audio and streams worldwide – and counting – of the breakthrough projects H.E.R. (RIAA-certified Platinum), I Used To Know Her, and hit singles including “Slide,” the powerful track and MTV Video Music Awards winning video “I Can’t Breathe” and her latest, “Damage.” Accumulating 13 Grammy nominations and 2 wins in just 3 years, H.E.R. has proven herself as an R&B force to be reckoned with.  In 2019, the singer/songwriter/multi-instrumentalist won two Grammy Awards for Best R&B Album (H.E.R.) and Best R&B Performance (“Best Part” featuring Daniel Caesar) and a NAACP Image Award for Outstanding Female Artist, among additional awards and accolades. H.E.R. and producer partner Live Nation Urban introduced Lights On Festival, the first female owned and curated R&B festival in decades.

Listen to “Fight For You” – https://jatbm.lnk.to/FightForYou