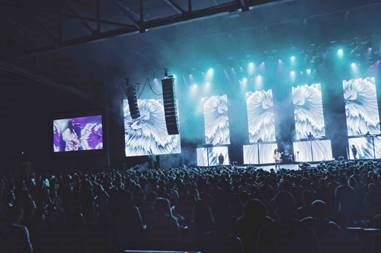 Grammy Award Winner H.E.R. Lit Up The Bay Area With Her Sold-Out “Lights On Festival” This Weekend

GRAMMY AWARD WINNER H.E.R. LIT UP THE BAY AREA WITH HER SOLD-OUT “LIGHTS ON FESTIVAL” THIS WEEKEND

14K PEOPLE IN ATTENDANCE PROVING THAT “R&B IS NOT DEAD”

[Concord, CA – September 16, 2019] This past weekend, Grammy Award winning R&B artist H.E.R. and producer partner Live Nation Urban lit up the Bay Area with her sold-out inaugural “Lights On Festival” at the Concord Pavilion. The festival included performances by a powerhouse lineup that included a headlining set by H.E.R. with special guests DRAM and YBN Cordae, and performances by Jhene Aiko, Daniel Caesar, Summer Walker, Ari Lennox and more. At 22 years old, H.E.R. breaks barriers in the R&B format by successfully launching the first-ever festival owned by a woman of color.

H.E.R. set out to build an event with the purpose of creating a platform to showcase various disciplines of the arts in a fun, colorful and energetic environment. She did just this with the addition of a film tent that showed screenings from new and undiscovered filmmakers. The grounds also hosted a live art installation, interactive tents with live instruments, an R&B museum and guitar lounge as well as a large arcade.

Ahead of the festival, H.E.R. hosted a giveback event at the Oaktown Jazz Workshop ahead of the festival. The Bay Area native teamed up with Adidas Asterisk Collective and Foot Locker to provide the youth and aspiring musicians at the center with shoes, clothing, instruments and tickets to the festival.

The festival was put on with the support of a diverse group of brand partners and sponsors who shared her vision. These alliances were arranged by UTA Music and MBK Entertainment, Inc., and the partners included Starbucks, Beats by Dre, Adidas Asterisk Collective and Foot Locker, DIFF Eyewear, PAC-MAN, Rock BandTM, Hilton Honors, TLR Jewelry, Oculus Venues, Red Vines, Angie’s BOOMCHICKAPOP, Fender, Amazon Music and Lyft.

“Lights on Festival” will return September 2020 as a two day event at The Concord Pavilion.

Enigmatic singer/songwriter/multi-instrumentalist H.E.R. has established herself as one of modern R&B’s most fascinating new talents. With two sold-out headlining tours and over 2 billion streams for her two remarkable EPs – H.E.R. and I Used To Know Her, the 22 year-old won two Grammy Awards this year for Best R&B Album (H.E.R.) and Best R&B Performance (“Best Part” featuring Daniel Caesar). Her latest release, I Used To Know Her, debuted at #1 on the Billboard Top R&B Albums chart, while fan favorites “Focus,” and “Best Part” earned the #1 slot on the Billboard Adult R&B Songs Airplay chart and Urban Adult Contemporary chart, respectively. In addition to her Grammy wins, H.E.R. is the recent 2019 Black Girls Rock “Young, Gift and Black” honoree and has won a BET Award and two Soul Train Music Awards.