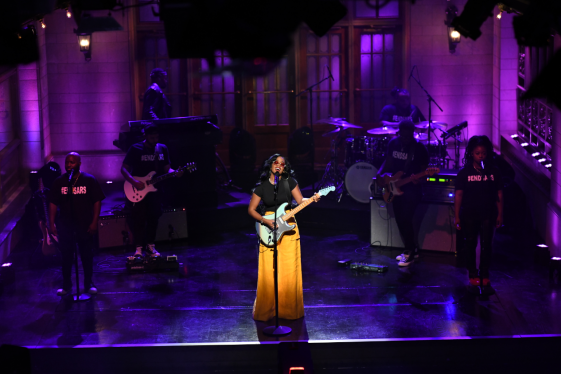 [New York, NY – October 26, 2020] This past Saturday, H.E.R., the two-time Grammy Award winning singer, songwriter and musician, made her stellar debut on the iconic Saturday Night Live stage with captivating performances of “Damage” and “Hold On.”  The studio versions of both songs are currently available at all digital service providers.

The performances have garnered praise from fans and press alike, including NPR, Entertainment Weekly, Billboard, UPROXX, The Atlantic and Rolling Stone who stated: “For ‘Damage,’ H.E.R. replicated the vibes of the track’s live music video released earlier this week, while the ballad ‘Hold On’ allowed the singer to show off her guitar chops…” H.E.R.’s SNL debut adds to a long impressive list of performances from the dynamic artist, including this year’s Emmy Awards with her beautiful rendition of Prince’s “Nothing Compares 2 U,” and two consecutive performances on the Grammy Awards in 2019 and 2020.

With a brand new full-length album on the horizon, H.E.R. recently became the second artist to score four #1 hits within two years on the Billboard Adult R&B Songs chart with her latest feature on Lonr’s “Make the Most.” Previous #1 chart-toppers were “Focus” and her collaborations with Skip Marley on “Slow Down” and Daniel Caesar on “Best Part.” The first to achieve this feat was Toni Braxton, who H.E.R. recently collaborated with on Toni’s new single “Gotta Move On.”

Click the links below to watch her SNL performances plus more and stay tuned for more news on the musical prodigy.

SNL Performance of “Hold On”: https://www.youtube.com/watch?v=1Cxi5mZ94v4

In a short period of time, H.E.R. has accrued over 7.5 billion combined audio and streams worldwide (5B in the US) – and counting – of the breakthrough projects H.E.R. (RIAA-certified Platinum), I Used To Know Her, and hit singles including “Slide” featuring YG, the powerful track “I Can’t Breathe” and her latest, “Damage.” Accumulating ten Grammy nominations and two wins in just two years, H.E.R. has proven herself as an R&B force to be reckoned with.  In 2019, the singer/songwriter/multi-instrumentalist won two Grammy Awards for Best R&B Album (H.E.R.) and Best R&B Performance (“Best Part” featuring Daniel Caesar) and a NAACP Image Award for Outstanding Female Artist.