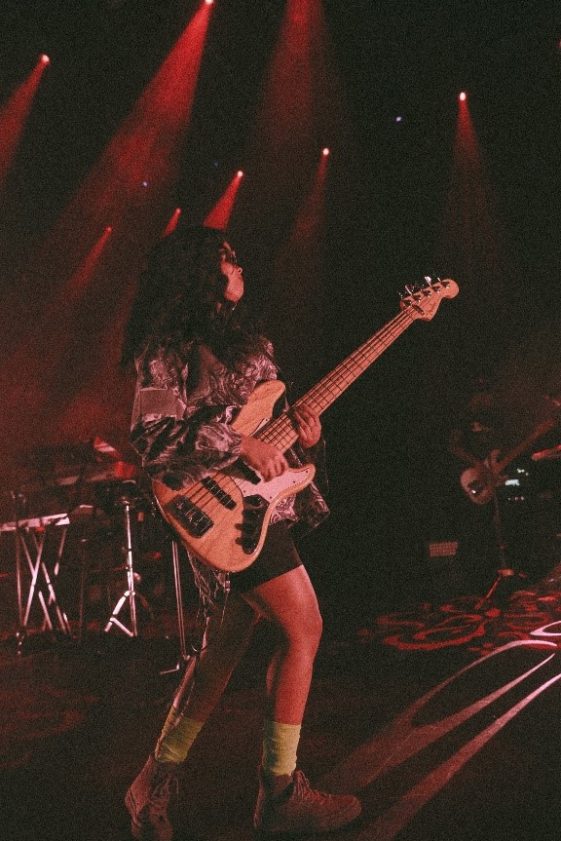 Currently on her sold-out “I Used To Know Her Tour” – her second sold-out headlining trek around North America – H.E.R. continues to garner praise for her live performances that not only highlight her honeyed vocals and self-penned lyrics, but also showcases her skills as a multi-talented musician playing keyboards, drum pad, acoustic and bass guitars.

For the December 14th show at the Novo in Los Angeles, H.E.R. has partnered with “WANTED,” a new interactive concert series giving fans worldwide unprecedented access to her live performance.  Presented by MWP Entertainment and MBK Entertainment, this inaugural event will be shot in front of a live audience with interactive displays, holograms, multi-camera media players and behind the scenes footage. In addition to the artist-to-live audience engagement, the concert will also be available via livestream on multiple platforms, allowing the concert to be enjoyed anywhere and everywhere. The “I Used To Know Her Tour” wraps on December 21st at The Warfield in San Francisco.

On March 24th and 25th, H.E.R. will join previous Grammy winner and fellow 2019 five-time Grammy nominated artist Childish Gambino at the 02 London. Tickets are on sale now at Live Nation.

Next year will also mark the launch of H.E.R.’s Bring The Noise Foundation, Inc., a non-profit organization to serve musicians and underprivileged students by providing them with access to instruments and top tier artists and instructors for mentorship and building self-confidence. The team of experts will offer a fun and fantastic program to provide the best positive learning experience. Programs will include piano, violin, viola, cello, clarinet, saxophone, flute, guitar, voice and songwriting. Participants can pursue their passion for music in a safe, supportive environment overseen by mentors and instructors who are at the top of their respective fields.  More information on Bring The Noise Foundation, Inc. will be provided at a later date.

Speaking on her dedication to musicianship and providing opportunities for others to hone their talents, H.E.R. states: “For me, music was a passion that soon became my purpose. Bring The Noise is going to pave the way for the next generations of musicians, producers, and singer/songwriters, to explore their passion and find their purpose!”

In 2018, Grammys.com declared, “The musical sensation is changing how we hear – and feel – music with her talent, vision and mystique,” and H.E.R. has proven them right by earning five 2019 Grammy Awards nominations – Album of the Year (H.E.R.), Best New Artist, Best R&B Album (H.E.R.), Best R&B Song (“Focus”) and Best R&B Performance (“Best Part” featuring Daniel Caesar). With over one billion combined streams to date, the release of the breakthrough H.E.R. and the recent releases of I Used To Know Her: The Prelude and Part 2, singer/songwriter/multi-instrumentalist H.E.R. has firmly established herself as one of modern music’s most fascinating new voices.

H.E.R. Vol. 1 peaked at #1 on the iTunes R&B/Soul Albums chart upon its release and H.E.R. Vol. 2 saw the same trajectory, resulting in two EPs within the Top 5 at the same time.  Her latest release, I Used To Know Her: The Prelude, debuted at #1 on the Billboard Top R&B Albums chart, while fan favorites “Focus,” and “Best Part” earned the #1 slot on the Billboard Adult R&B Songs Airplay chart and Urban Adult Contemporary chart, respectively. H.E.R. recently won two 2018 Soul Train Music Awards for Album/Mixtape of the Year for H.E.R. and Best Collaboration Performance “Best Part” feat. Daniel Caesar.

After captivating audiences with performances on The Tonight Show starring Jimmy Fallon, Jimmy Kimmel Live, 2018 BET Awards – plus commanding the stage on her own sold out headlining domestic and international tours – the future is bright for this young star. In fact Elle magazine proclaims, “H.E.R. is more than a rising star – she’s a damn galaxy.”