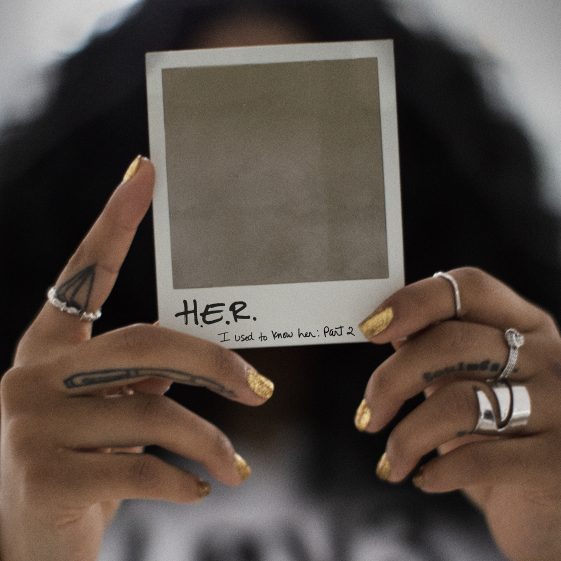 SELECTED AS APPLE MUSIC’S UP NEXT ARTIST

“Nowadays the typical formula for success includes information overload, but H.E.R. has actually managed to win with her mystique. Her silence is loud. Her shadow is light. That’s the thing about going left when everyone else goes right, it grabs people’s attention.” – Grammys.com

[New York, NY – November 2, 2018] Today, H.E.R. releases I Used To Know Her: Part 2, an 8-track,  digital only EP, and the follow up to her I Used To Know Her: The Prelude EP, which debuted at #1 on the Billboard R&B Albums chart.  The new EP examines the perils and pleasures of relationships and coming of age in today’s society.  Click here to listen.

The mysterious singer/songwriter/musician reveals a bit more of herself with the premiere of the alluring “Could’ve Been” video featuring Bryson Tiller.  Shot over the course of 2 nights in Miami, the beautifully shot video, directed by Lacey Duke (Janelle Monáe, Dram, Netflix’s Strong Black Lead spot), shows the characters musing over what could have been, matching the contemplative sentiment contained in the collaborative ballad from The Prelude EP. Click here to watch.

Earlier this week, Apple Music announced H.E.R. as the latest “Up Next” artist to be featured within the video and music streaming service’s monthly program geared towards identifying and showcasing rising talent. The singer and multi-instrumentalist is currently the #6 R&B artist worldwide across Apple Music and has been a mainstay on The A-List: R&B playlist and Beats 1 Radio since September 2016. On November 6, Apple Music will feature a ‘Up Next with H.E.R.’ short film that will give fans a behind-the-scenes look at the fascinating R&B artist’s career, musical background and process—in her own words and from those who work with her most closely.

H.E.R. also has the distinct honor of being the most nominated artist for the 2018 Soul Train Awards with 7 nominations, including Best R&B/Soul Female Artist, Song of the Year (“Every Kind of Way”), Album/Mixtape of the Year (H.E.R.), Best Collaboration Performance (“Best Part” w/Daniel Caesar), Video of the Year (“Avenue”) and two Ashford and Simpson Songwriter’s Awards (“Focus,” “Best Part” w/Daniel Caesar).   The 2018 Soul Train Awards will air on November 25 at 8pm ET on BET.

She will kick off her second headlining North American tour on November 10th in Atlanta. The “I Used to Know HER” tour will make stops in a number of major cities including New York, Chicago, San Francisco and more. Bri Steves and Tone Stith will join the tour as the opening acts. See full tour routing below.

With over one billion combined streams to date, the release of the breakthrough H.E.R. Vol. 1, H.E.R. Vol. 2 – The B Sides, and I Used To Know Her: The Prelude, singer/songwriter/musician H.E.R. has quickly established herself as one of modern music’s most fascinating new voices. H.E.R. Vol. 1 peaked at #1 on the iTunes R&B/Soul Albums chart upon its release and made iTunes’ Best of 2016 R&B/Soul Albums list. H.E.R. Vol. 2 saw the same trajectory, claiming the #1 spot on the iTunes R&B/Soul Albums chart, resulting in two EPs within the Top 5 at the same time.  Her recent release, I Used To Know Her: The Prelude, debuted at #1 on the Billboard Top R&B Albums chart, while fan favorites “Focus,” and “Best Part” with Daniel Caesar, each earned the #1 spot on the Billboard Adult R&B Songs chart.  Additionally, “Focus” is RIAA-certified Gold and “Best Part” is RIAA-certified Platinum. After captivating audiences with performances on The Tonight Show starring Jimmy Fallon, Jimmy Kimmel Live and the 2018 BET Awards – plus commanding the stage on her own sold out headlining domestic and international tours – the future is bright for this young star. In fact Elle magazine proclaims, “H.E.R. is more than a rising star – she’s a damn galaxy.”

Stream/purchase I Used To Know HER: Part 2 EP:

I Used To Know HER: Part 2 EP Track List:

Watch the “Could’ve Been” Video: https://www.youtube.com/watch?v=4hYCmPBlmwc

“I Used To Know HER Tour” Tour Dates: