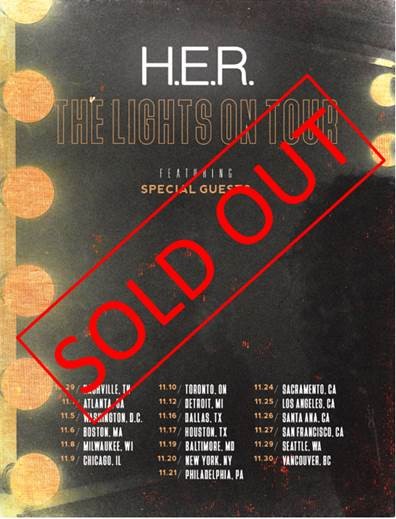 H.E.R. announces “The Lights On Tour” hot off the heels of wrapping supporting dates on Bryson Tiller’s “Set It Off Tour.” H.E.R. excited audiences across the country with her gorgeous vocal performances, which Billboard described, “H.E.R belted out each song with fervor and confidence… [with] indelible vocal runs… [a set] chock-full of sultry, slow-burning melodies.” Vortex Magazine raved, “Her talent behind the mic is no secret; however, what stood out most was her multi-instrumental abilities…even the short set stunned the crowd and had some begging for a few more songs…”

Fans will be able to hear more songs on the digital deluxe release of H.E.R. on October 20th. The deluxe streaming edition will include five new tracks, plus the beautiful duet “Best Part” with Daniel Caesar.  H.E.R. will be available for pre-save at Spotify and pre-order at Apple Music on October 6th.