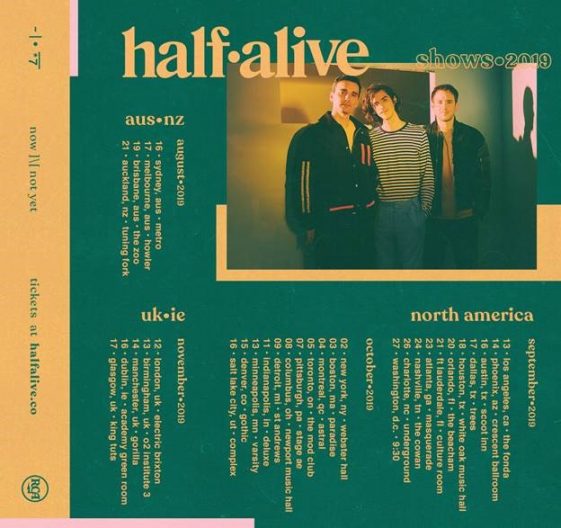 (Los Angeles, CA) Long Beach based trio half•alive have announced their global headline tour for this fall. The tour kicks off in Australia on August 16 before the band embarks on a 21-date North American tour throughout September and October. The tour wraps in Glasgow, UK on November 17. Tickets are available here beginning March 22nd at 10am local time. For various pre-sale information click here.

Last night half•alive made their late night television debut with a very special performance of their single “still feel.” on Jimmy Kimmel Live!. Check out the incredible and unique performance here. “still feel.” is currently skyrocketing up the charts at Alternative Radio, currently sitting within the Top 25.

“arrow” is the first new release for half•alive since catapulting into the zeitgeist with their massive viral 2018 breakout “still feel.” Powered by a slick beat, handclaps, warbling bass, wild horns, shimmering keys, and an ecstatic falsetto-inflected chant, “I still feel a•live,” it became a clarion call for the boys—oddly perfect for either a midsummer festival or a dance sequence from Pulp Fiction. Bringing the song to life, Josh drew on his film school background and self-directed an impressively choreographed video evoking vintage pops of color and the kind of throwback seventies spirit. The video organically attracted shares among fans and has already surpassed 17 million views. Additionally half•alive has garnered acclaim from NPR’s coveted “All Songs Considered”, TIME and more.

Additionally half•alive recently wrapped their completely sold out first-ever headlining tour and are currently in the studio working on their debut album.