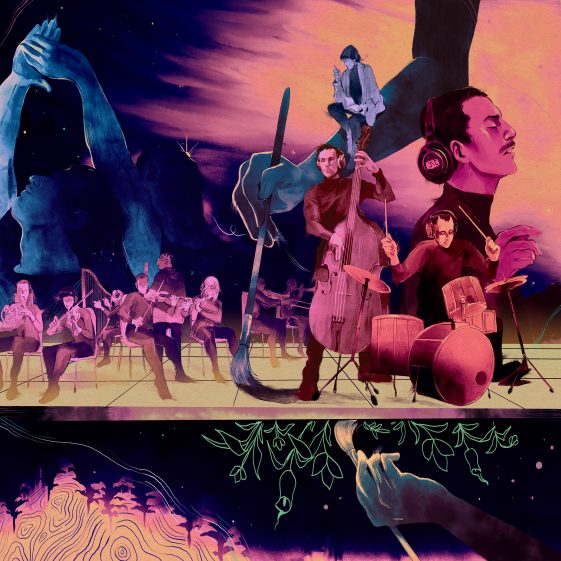 half•alive ANNOUNCE “in Florescence” EP OUT MAY 1ST

(Los Angeles, CA –April 27th, 2020 ) – Long Beach based trio half•alive today announced they will be releasing “in Florescence” an audio and visual project that includes orchestral arrangements of 4 tracks off their critically acclaimed debut album Now, Not Yet as well as videos for 3 of the 4 songs to accompany them. “in Florescence” arrives on May 1st via RCA Records. The first track and video “RUNAWAY (w/ Orchestra)” is out now. Click HERE to listen / watch.

Recorded earlier this year, this was a one day feat of creativity and talent as band, composer, orchestra ensemble, video director + crew, dancers, recording engineer, live painters, etc  — all came together to live record and film a whole project over the course of 12 hours at Capitol Studios without having any advanced rehearsal. . The EP was arranged by arranger/composer Miguel Atwood Ferguson (Ray Charles, Flying Lotus, Thundercat), mixed by Tom Elmhirst (Frank Ocean, Adele, Arcade Fire) — the videos were directed by Mimi Cave (Sylvan Esso, Vance Joy), and choreographed by JA collective.

Says half•alive, ““in Florescence” is an invitation to experience songs from half•alive’s full length debut “Now, Not Yet” with both the familiar & new.

We wanted to reconstruct the music; exploring where it could bend & flow. We partnered with composer Miguel Atwood Ferguson to help the songs breathe with new energy.

“In florescence” means “in the process of flowering”, which we thought adequately described two themes we are very passionate about in our art-  the surface level being these songs in particular, in their finding new ways to bloom.  And second, on a deeper level, to every human being’s continual transformation & longing for The Beautiful;  in both conscious & subconscious pursuit.”

Known for their incredibly creative videos and live shows, the band made their late night television debut last year with a very special performance of “still feel.” on Jimmy Kimmel Live!. Check out the incredible and unique performance HERE. They also performed “Runaway” on The Late Late Show with James Corden last September. half•alive’s live Vevo DSCVR performances of “RUNAWAY” and “arrow” are out now and YouTube announced them as their next Artist on the Rise. They also delivered landmark performances at last year’s Lollapalooza and Outside Lands festivals as well as selling out clubs and theaters on their debut album’s headline tour across North America, Australia, UK, and Europe.

The music of half•alive breathes, evolves, grows, and changes alongside the lives of the Long Beach trio—Josh Taylor [vocals], Brett Kramer [drums], and J Tyler Johnson [bass]. Encompassing R&B, funk, pop, rock, soul, and more under a glow of disco ball bliss, the experience iterates in a fresh form every time. half•alive officially came to life on the 2017 3 EP, which sparked a palpable buzz on the strength of “The Fall” and “Aawake At Night”. Over the course of the next year, they crafted what became the 2018 breakout “still feel.” The video organically surpassed the 10 million mark within two months as the song garnered acclaim from NPR’s coveted “All Songs Considered” and more. “still feel.” took off, and the band’s profile burgeoned as they inked a deal with RCA Records to help grow their vision. Launching 2019 with a bang, the trio sold out their formal debut headlining tour which included 2 sold out shows at The Fonda Theatre in LA. The tour also included stops at major music festivals including Lollapalooza, Outside Lands and Bumbershoot. They saw “still feel.” reach new heights as it rocketed into the Top 10 at Alternative radio with over 37 million video views and over 53 million global streams to date. Later that year the band made their late night television debut with a very special performance of “still feel.” on Jimmy Kimmel Live!. Check out the incredible and unique performance HERE. They also performed “Runaway” on The Late Late Show with James Corden. In August, they released their debut album Now, Not Yet which has amassed over 158 million worldwide audio streams. half•alive’s live Vevo DSCVR performances of “RUNAWAY” and “arrow” are out now and they were also named one of YouTube’s Artist on the Rise.