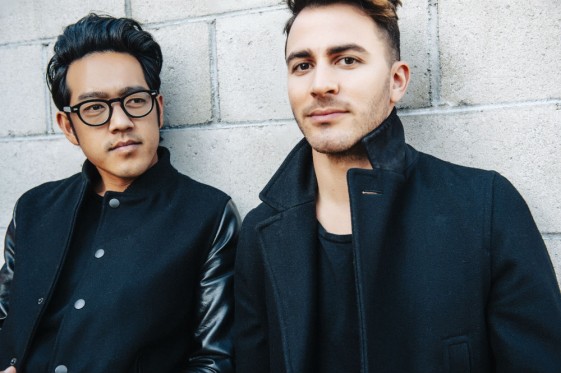 Today, Hunter Hunted announce their upcoming debut album Ready For You, which will come out on July 10 via FreeSolo/RCA. Last week, right before their Sasquatch! Festival set, Los Angeles duo Hunter Hunted revealed their first single “Blindside” of the album. You can now see a very special lyric video for the song via Idolator HERE. They’ll set out on a 20-date co-headlining tour with Young Rising Sons in July and August and will be able to play album tracks like “Operating”, “Ready For You”, and “End Of The World” live for the first time.

Capable of crafting stadium-sized pop missives that are hugely catchy and wonderfully earnest, the duo of Michael Garner and Dan Chang, write songs that tread an easy path between the head and heart, bursting at the seems with undeniable melodies and choruses that are custom-made to be sung along to, preferably at peak volume while surrounded by several hundred of your brand new very best friends.

On Ready for You Hunter Hunted’s ambition is fantastically evident. It’s a record that seems tailor-made to engineer happiness. It’s a pop record with long legs—packed with tracks that balance razor-sharp hooks with heartfelt sentiment. “We want to make songs that make people happy, songs that you can hear on the radio and that make you want to sing and dance,” says Garner. “We want to get to that point where we make a song that takes the world by storm, where it’s like, ‘Holy shit. This song is hitting so hard. We don’t even know how to handle it!’ We’re still waiting for that moment where all of this just takes off and knocks us off our butts.”

The story of Hunter Hunted begins, at least for most people, with the release of their debut EP, Hunter Hunted, in 2013. However, the group’s roots go back much further as they met at UCLA. They’ve been included in MTV’s Artists To Watch, NYLON’s “Bands to look out for,” Starbucks “Pick of The Week, “Teen Vogue’s “Jam’s of the year,” Billboard Magazines “Scouting Report” and KCRW’s “Bands we Love.”

While standout track “Keep Together” was making the rounds on TV shows, the band’s early singles quickly elevated Hunter Hunted from the ranks of indie-pop hopefuls to serious chart contenders, touring alongside FUN., Fitz and The Tantrums, Weezer, and Twenty One Pilots. The band also turned in lauded performances at Bonnaroo, Governors Ball and Firefly, as well as stops on Conan O’Brien’s late night show and The Victoria’s Secret Fashion Show pre-show.

When asked about “Blindside” and the upcoming debut album they say, “We wanted to write songs that were both tiny and huge. Songs that you could play on an acoustic guitar alone or with a big band inside an arena.” With the help of Howard benson and Neil Avron behind the boards, Hunter Hunted have achieved that.

The band has a busy year ahead of them – their co-headlining tour with Interscope’s Young Rising Sons for July/August is only the start of what’s to come.