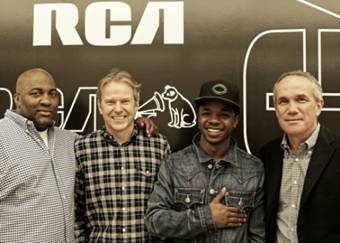 “All Hustle, No Luck” Pays Off As Cincinnati’s Lantana Signs With Polo Grounds/RCA Records

Lantana’s current single, “All Hustle, No Luck,” will be serviced to mixshow radio in the coming days, followed by a revamped version of the video.

“Lantana is a breath of fresh air. His passion and hunger brings fresh energy to the game and to the Polo Grounds roster,” comments Leach.

Representing his hometown and named after the first street he grew up on in the College Hill section, Lantana joins the ranks of Bone Thugs-N-Harmony and Machine Gun Kelly as the next major hip-hop act to emerge from the Buckeye State of Ohio.

“I have to thank my family and my city, Cincinnati, for making me who I am and supporting me,” says Lantana, who also serves as CEO of All Hustle No Luck Entertainment, LTD. “When you work hard and believe in yourself anything is possible. ALL HUSTLE, NO LUCK 4real!! I appreciate Bryan Leach, Polo Grounds and the people at RCA for believing in my talents. I’m ready to take this as far as it can go.”

In 2006, Lantana dropped his first mixtape, It’s Dat Real, a hood classic that placed the then 19 year-old on the map. After serving four years in prison, Lantana hit the ground running upon his release and dropped his second mixtape, Lantana on the Way in May 2012. That mixtape’s standout cut, “All Hustle, No Luck,” won him “Best New Artist” and “Mixtape of the Year” honors at the 2012 Ohio Hip-Hop Awards. With his popularity quickly soaring, inclusive of winning the “Fans Choice” award at the 2012 Beats Summer Concert Series, Lantana immediately followed with the October 2012 release of The All Hustle, No Luck Tape which featured contributions from local artists Dubb Santora, 40 Mike and Fly. Lantana is currently working on an EP to be release later this year.

Having opened for such artists as Yelawolf, Young Jeezy, Big K.R.I.T. and Machine Gun Kelly, Lantana is ready to take center stage as one of the featured performers, alongside 2 Chainz, J. Cole, Juicy J, and French Montana among others, on select dates of the “DUB Show Tour 2013,” – “the world’s largest custom car show and concert tour.”

For more news on Lantana visit www.allhustlenoluck.com and follow him @lantanaeasy.