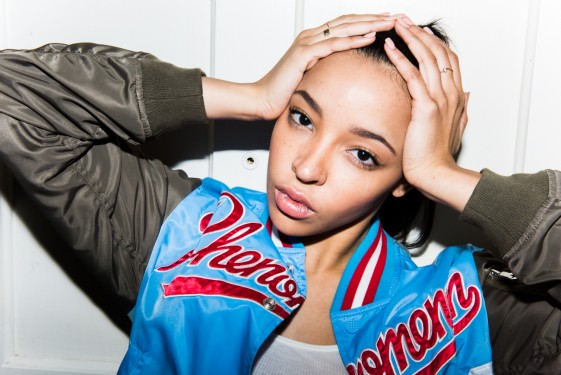 Inside Tinashe’s World Via ‘The Coveteur’

Story by: Meagan Wilson for The Coveteur

Hanging out at Tinashe‘s family home, just north of Los Angeles, while the singer-songwriter-producer sits cross-legged in bed or plays in the backyard with her dog all feels totally normal. But why the surprise on our part? For starters, the singer’s iCal ticks off items like “cover Complex in Moschino skivvies inside a giant martini glass,” “collaborate with M.A.C,” “be hand-picked by Janet Jackson to perform in a BET tribute,” “tour literally all over the world” and “respond to millions of fans on social media.” And yet there we were, after being led in by the singer’s mom, sorting through her collection of hoodies and high-tops.

That’s right: Tinashe’s wardrobe, despite belonging to the girl whose debut, Aquarius, received near-universal praise and prompted parallels to her idols (Jackson and Aaliyah), is as about as low-key as it gets—no “All Hands on Deck”-ish thigh-highs or sheer trenchcoats here. And she likes it that way. “My style is super chill, which I think translates to my whole life. I try to just not get too worked up.” In fact, it’s probably that same sense of perennial chill that allows for her laser-sharp focus on her career too—as a singer, songwriter, producer, and Jackson-level dancer, the girl’s a bona fide quadruple threat. And, best of all, she’s unabashedly open about not being recognized as such and how that needs to change: “It’s really important to develop that respect among my peers musically, dealing with people who think they know better than I do what my sound should be and what I should be doing,” she explained to us.

But back to that closet. After sorting through, we precariously placed a gold CHANEL chain across her equipment (if you’re as fervent a fan as we are of Aquarius, you’ll know that the singer actually produces and records regularly out of her bedroom studio) and her fire-engine-red sneakers and Louis Vuitton bag just so above her collection of platinum records. Totally normal…ish.

“I think the biggest thing that I’ve had to deal with as a young woman is sexism. The entertainment industry is such a male-dominated field. There are barely any female musicians that I’ve worked with—engineers, producers. I’ve only worked with two, maybe; I can count on one hand all the women I’ve worked with creatively. It’s insane! It definitely sets a precedent knowing you’re going to work with all these male artists, especially as a young woman, a quote-unquote ‘cute girl.’ A lot of them are thinking ‘Okay, she has probably come this far because of how she looks or she’s sleeping around.’ It’s really important to just develop that respect among my peers musically. My biggest challenge is dealing with people who think they know better than I do what my sound should be and what I should be doing. That’s the biggest thing.”

”I am super comfortable [in my room]. I feel like that’s where I just happen to have a special place for inspiration, so I really try to continue to create music there, and a lot of the new stuff has been created there as well. I like to keep that essence.”