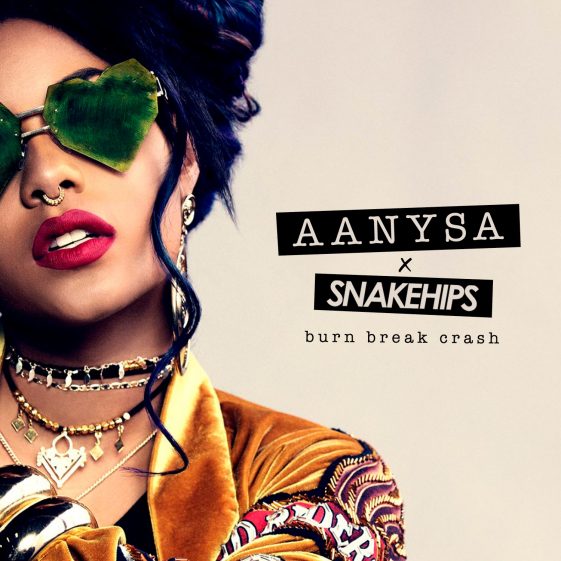 About Aanysa
Seventeen-year-old singer, dancer, and songwriter, Aanysa, is gearing up to release brand new music for her first album with RCA Records. The cross-genre artist brings us music that combines 90’s pop-R&B and nu-disco.  Aanysa seeks her inspiration from female powerhouses like Beyoncé and Janet Jackson who have influenced her both musically and as an entertainer as a whole. The Kansas City-born and now Los Angeles-based singer/songwriter has been a performer her entire life, with her unique dancing style being cultivated over the past few years living in LA all while she continues to develop music.  Songs off of her debut album, “Burn Break Crash”, which is produced by U.K. DJ duo, Snakehips, and “Mathematics”, perfectly capture Aanysa’s unique signature and extremely catchy sound, and are expected to propel her musical career to great heights.  Aanysa’s debut album is set for release in 2017.

London natives, Snakehips, consists of Oliver Lee and James Carter. Although, they hail from the city, the 25 year-olds met on a separate business trips to Hong Kong, where they bonded over shared musical interests. Shortly after meeting, the pair began crafting Hype Machine chart-topping remixes for Banks, The Weeknd, Bondax and Wild Belle. In 2015, the duo released their EP, Forever (Pt II) featuring vocals from such artists as The Internet’s Syd, Kaleem Taylor, singer-songwriter Sasha Keable and Daniella T.A.O.L., crafting a sound that can be best described as a sensual, contemporary take on old school R&B and hip hop. In fall of 2015, Snakehips released their massive single “All My Friends” featuring Tinashe & Chance The Rapper, which they performed with Tinashe on Jimmy Kimmel Live!.  “All My Friends” also appears on their latest EP of the same name, and includes collaborations with U.K. singer, Malika, Canadian rapper, Tory Lanez, along with “Money On Me”, featuring Dr Dre protégé, Anderson .Paak.  They recently collaborated with ZAYN on their latest track entitled “Cruel”.  Click HERE to watch the music video. Snakehips performed at this year’s Coachella Music & Arts Festival, Lollapalooza in Chicago, Outside Lands in San Francisco, and most recently, Life Is Beautiful in Las Vegas.  The duo will also kicking off their North American tour on October 26th in Dallas, TX.