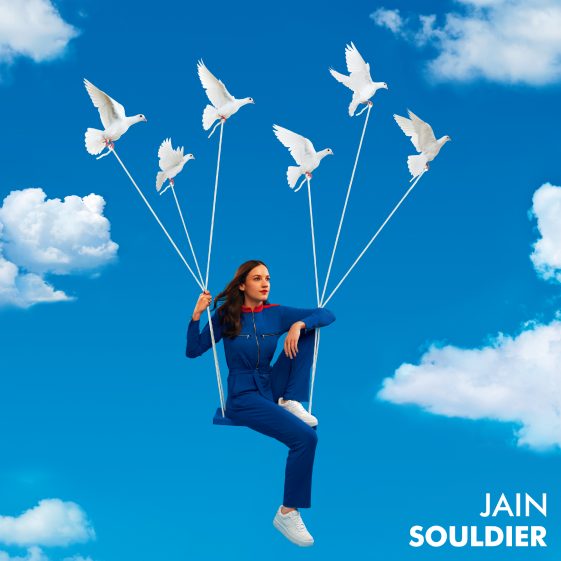 French international sensation JAIN will release her highly anticipated sophomore album Souldier on August 24th via Spookland/Sony Music France/RCA Records. Produced by Jain and Maxim Nucci (who also produced her debut album Zanaka), the album was recorded in Paris, FR. Souldier is available for pre-order now and includes lead single “Alright” as well as “Star” which is now available on all DSPs. See full tracklisting below.

JAIN says about this new album: “Souldier is an album which was written on the road, crossing various countries and inspirations during its time of writing. I wanted to release it as quickly as I could, to make sure it resembled me as much as possible.

Having mostly highlighted my teenage years and Congolese rumba on “Zanaka”, this time around I wanted to show a bit more of myself. The aim was to broaden my influences, both those from my childhood and my current ones.

I’m a big fan of Kendrick Lamar’s flow, Tito Puente’s softness, Fairuz’ elegance and Bob Marley’s melodies and, amongst all this music that I so love, I tried to find my own. That’s how Souldier was born, of the desire to combine what I like, and of the desire to talk of both timeless and contemporary subjects.

For this, I was lucky enough to work with a team of incredible music-lovers with great musical knowledge, with my manager as well as with the great musician and artist Maxim Nucci.”

Today JAIN is sharing “Star”, a second track from her new album along with a lyric video created by Moment Factory, who are also behind the creative direction of JAIN’s new live show – watch the video here.

JAIN says: “This song is self-mockery. It’s about being stuck between chasing after success on the one hand, and the desire to steer clear of excessive media-exposure on the other.

It is also a critique of the concept of “fame” and our society as a whole, a society in which we all constantly promote and expose ourselves.

Star is a song about those people, about myself, about those moments in life where we favor celebrity over art.

It’s a reflection of our paradox as people, both very conscious and very kitsch.”

While she is currently on the road for the summer festival season, Jain will embark on a 2018 North American headline tour, kicking off October 9th at the El Rey Theatre in Los Angeles and continuing through to a final night at New York City’s Irving Plaza on November 1st. Tickets are on sale now, visit http:/www.jain-music.com for more information.

Earlier this week JAIN released the official video for “Alright”, watch here. The video was directed by Greg & Lio, the same successful creative team who directed her first video trilogy (“Come”, “Makeba”, “Dynabeat”) which now boasts over 150 million views altogether. “Makeba” won the award for Best Video at the 2016 French Victoires de la Musique and was nominated for best video of the year at the 60th Grammy Awards this year.