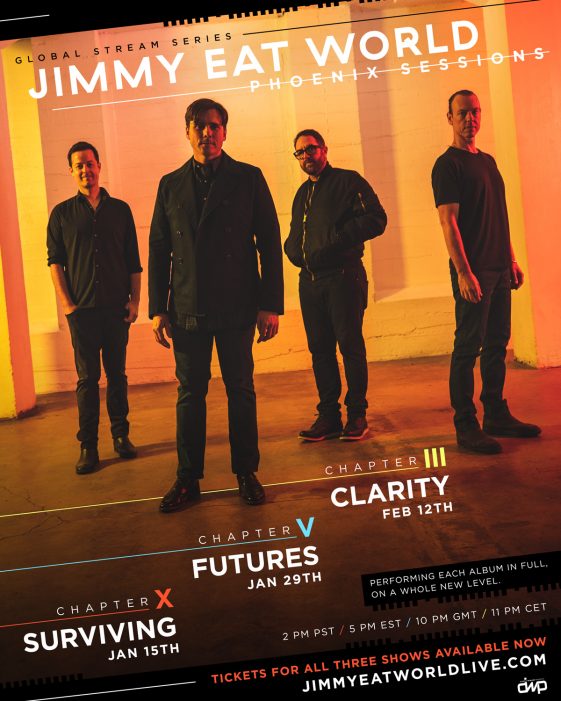 TICKETS ON SALE NOW AT JIMMYEATWORLDLIVE.COM

To kick off 2021, the band will come together for one-of-a-kind performances of three “chapters” in their storied career. Beginning January 15th with a performance of their 10th studio album Surviving (Chapter X), which has only been seen live by the lucky fans who made it to the shows last October, followed by Futures (Chapter V) on January 29th and Clarity (Chapter III) on February 12th.  Recorded at the Icehouse in Phoenix, AZ, the virtual events will feature the band performing each album in its entirety for a full concert experience.  Each show will start at 2pm PST / 5pm EST / 10pm GMT / 11pm CET and will be available on demand for 72 hours post stream at JimmyEatWorldLive.com.

“We are always looking for ways to challenge ourselves, to do things as music fans that we think would be cool for OUR fans. We came up with the idea of presenting a series of concert films centered around a few specific albums (for now) and performing them on a different level. It isn’t the way we normally play a show and it’s definitely something new for how we approach a performance, but we haven’t been able to share the experience with our fans in over a year… so here we go!” – Jim Adkins

Tickets for these events are on sale NOW and can be purchased as a single show or in a three-pack bundle.  Early bird pricing begins at $14.99 for a single performance (through the Sunday prior to each show) and $39.99 for the bundle of all three through January 10th.  Other bundles, merchandise and VIP meet and greets will be available at a variety of price levels.  For more information on tickets and bundles please visit: JimmyEatWorldLive.com.

About Danny Wimmer Presents: Since 1993, music industry veteran Danny Wimmer has been producing concerts and festivals, both large and small. In 2011, he formed Danny Wimmer Presents, which now produces several of the largest rock and alternative festivals in the U.S. By combining A-list talent with local cuisine and culture, DWP has become recognized within the industry for delivering the highest-quality entertainment experiences to fans, artists, sponsors, partners and host cities. DWP creates memorable and all-encompassing festival experiences, leaving both consumers and partners with lasting and meaningful impressions. DWP will continue to add new music festivals to its already stellar portfolio, which currently includes Aftershock, Bourbon & Beyond, Epicenter, Hometown Rising, Louder Than Life, Sonic Temple Art + Music Festival, and Welcome To Rockville. Previous DWP festivals include Rock On The Range, Carolina Rebellion, Northern Invasion and more.  In 2020, DWP launched the popular digital series Offstage with DWP and ventured into the digital content curation space, promoting pay-per-view live streams.