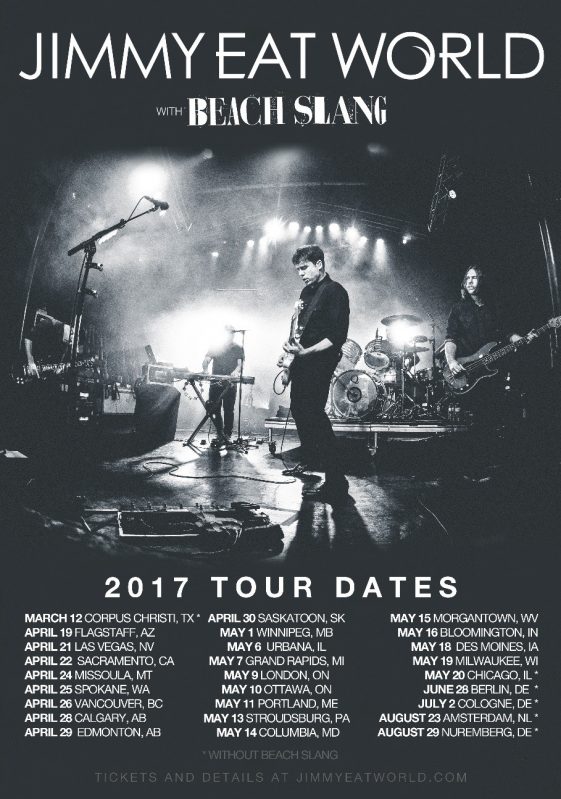 New York, NY (February 6, 2017) – Coming off of a successful Australian tour and a show-stopping performance as the headliner of the Australian Open, Jimmy Eat World announces today new North American dates starting on April 19th in Flagstaff, AZ with special guest Beach Slang. The band will make their way around the country, hitting some favorites like Las Vegas, Portland, ME and more, concluding on May 20th in Chicago. Tickets for the tour will be available for presale on February 8th and 9th and will be on sale to the general public on February 10th.

Jimmy Eat World will hit the road starting Friday, February 24th in Tucson, Arizona before heading to South America. This past fall, the band’s critically acclaimed tour received rave reviews from outlets such as Paste who declared that “Jimmy Eat World showed how gracefully they’ve evolved since their inception in 1994, showing off new driving, harmony-filled songs,” while Brooklyn Vegan stated that the band is “still humble on stage but precision-wise they’re like stars.”

A few weeks ago, the band performed “Get Right” off of their ninth-studio album Integrity Blues on Conan. Click here to check it out.

For a complete list of tour dates and where to buy tickets, please visit: http://www.jimmyeatworld.com/tour.