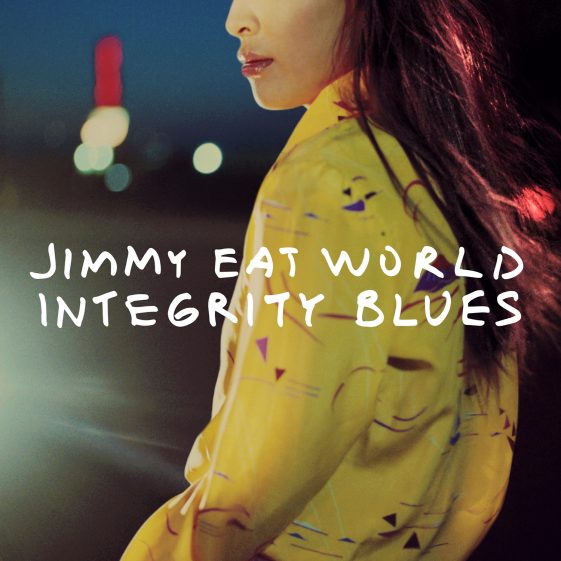 “…some of the band’s most adventurous musical statements in years…”

“Integrity Blues is, all at once, classic Jimmy Eat World and the next evolution. It’s the perfect encapsulation of where they’ve been, where they are and where they’re going. It’s their best work since 2004’s Futures.”

“…effortlessly nostalgic and timeless at the same time…Integrity Blues taps into the same vein Jimmy Eat World’s previous albums have, only this time, with a newfound sense of security.”

“Back with their ninth studio album, Integrity Blues is a reminder that a rock album can still be a musical collage of thoughts, feelings and subject matters.”

Produced by Justin Meldal-Johnsen (Paramore, M83), the 11 track LP features the first single, “Sure And Certain” along with the other previously released gems “Get Right,” “You With Me” and “You Are Free.”  The single received rave reviews in the press with Entertainment Weekly calling it “a soaring, guitar-laden entry” and Consequence of Sound proclaiming the song “dolefully anthemic.” The band recently delivered a powerful performance of the track on The Late Show with Stephen Colbert and will be performing on Jimmy Kimmel Live! on October 25th.

Jimmy Eat World is currently on their world tour, which will be stopping in Los Angeles and other parts of California before embarking on the European leg kicking off this November. The band announced this week additional U.S. tour dates in Minneapolis, Washington D.C., Asbury Park, NJ and New York City. Tickets for these new dates are on sale today at 10am local time. The band also announces today a headlining show in Montevideo, Uruguay on March 30th. Tickets will be on sale for this date November 4th. For a complete list of tour dates please visit: http://www.jimmyeatworld.com/tour.