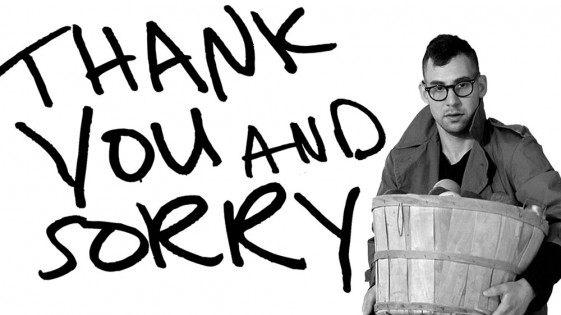 Join Grammy® Award-Winning Musician Jack Antonoff As He Navigates The Bizarre World Of Tours, Domineering Managers & Life On The Road

Life on the road is tough for a neurotic germaphobe who just turned 31. Thank You and Sorry is an original six-part, docu-style series that follows GRAMMY® Award-winning indie rocker Jack Antonoff during Bleachers’ world tour as he ponders relationships, life’s big questions and encounters a strange cast of unusual and witty characters along the way. Produced by Above Average, Thank You and Sorry debuts exclusively for FREE on Google Play on Tuesday, June 16, 2015. Pre-order the series for your library now.

Shot entirely in black and white, Thank You and Sorry combines real footage from the recent Bleachers tour alongside entertaining twisted scripted moments. Joining Jack on his journey through life on the road are his fellow bandmates and a series of crazed managers who can’t quite get it right from Olivia Wilde as a fellow OCD germaphobe to Colin Quinn who insists that sending a bushel of apples is the ultimate “class act”. Other celebrity cameos in the series include Rosie Perez, among other surprise guests.

“Making records and being on tour constantly feels like a strange blend between real life and a production of your life the way you imagined it. With that in mind, we did that literally with ‘Thank You and Sorry’. When we shot, we would script elements of real situations and the entire process started to become blurry as to what did and didn’t actually happen. Strange times,” Antonoff explains.

GRAMMY® Award-winning musician Jack Antonoff’s most recent musical endeavor Bleachers released the critically acclaimed debut album “Strange Desire” in July of 2014. Antonoff’s music career started to take shape in 2002 as the lead singer of the New Jersey born indie rock band Steel Train; he later gained notoriety as the lead guitarist for the GRAMMY®Award-winning band fun. Bleachers found success with their very first single “I Wanna Get Better” which quickly rose to No. 1 on the alt radio chart while the second single “Rollercoaster” hit #3 on the chart. Earlier this week, Bleachers announced the third single “Like A River Runs” and accompanying EP which is available now and features a variety of versions including one by RCA label mate Sia. Bleachers is currently touring across the US and is about to embark on a co-headlining tour with Charli XCX called “Charli and Jack Do America” which kicks off July 21st in San Diego.