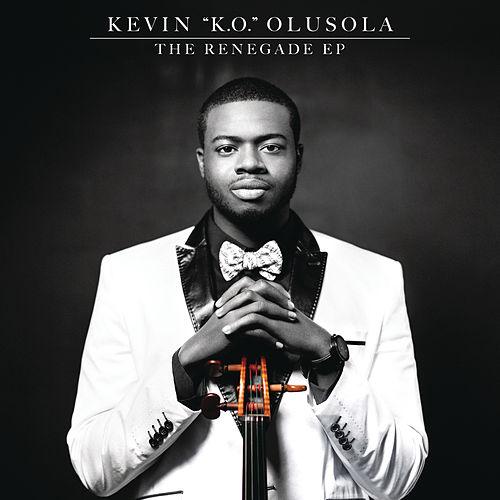 Fresh off his Grammy win as a member of platinum-selling, vocal quintet Pentatonix, Kevin “K.O.” Olusola – cellist, beatboxer, producer – has released his debut solo effort – The Renegade EP – via iTunes today. The EP which features Olusola’s now famous celloboxing (simultaneously playing cello and beatboxing) is currently #1 on iTunes Classical Album Chart. In addition, his rendition of Sam Smith’s “Stay With Me” is #1 on iTunes Classical Singles Chart.

In conjunction with today’s release, Olusola released the music video for the title track and original composition “Renegade.” For the past six days, he released a series video entitled “KOStory.” The 6 videos showcase interview footage of Kevin talking about his background and the making of the EP.

The 5 track EP also includes arrangements of John Legend’s “All Of Me” and Demi Lovato’s “Heart Attack,” as well “Julie-O”, which Olusola originally performed in 2011 via a YouTube video that garnered worldwide acclaim (and millions of YouTube views).

Kevin Olusola (pronounced Olú-shola) is most commonly known as one fifth of the Grammy winning / platinum selling group Pentatonix. At an early age, Olusola began learning piano, cello and saxophone. He performed at Carnegie Hall twice as soloist on the cello and saxophone and has appeared on NPR’s “From The Top.” Olusola enrolled in Yale University where he was pre-med and majored in East Asian Studies. He spent 18 months in Beijing becoming fluent in Chinese as a part of his Yale fellowship. He later went on to win second place in the “Celebrate and Collaborate with Yo-Yo Ma” international competition. Ma called Olusola’s celloboxing version of “Dona Nobis Pacem” both “inventive and unexpected.” In 2011, Olusola’s “Julie-O” celloboxing YouTube video was featured by CBS, AOL, Huffington Post and Washington Post, among others. He was also named one of 100 “History Makers in the Making” by NBC’s TheGrio and was hand-chosen by Quincy Jones to represent him in concert at the 2012 Montreux Jazz Festival alongside Bobby McFerrin and Chick Corea. Along with his presenter spot with Pentatonix at the 57th Annual Grammy Awards, Kevin also was a featured cellist in Pharrell’s performance of “Happy.”