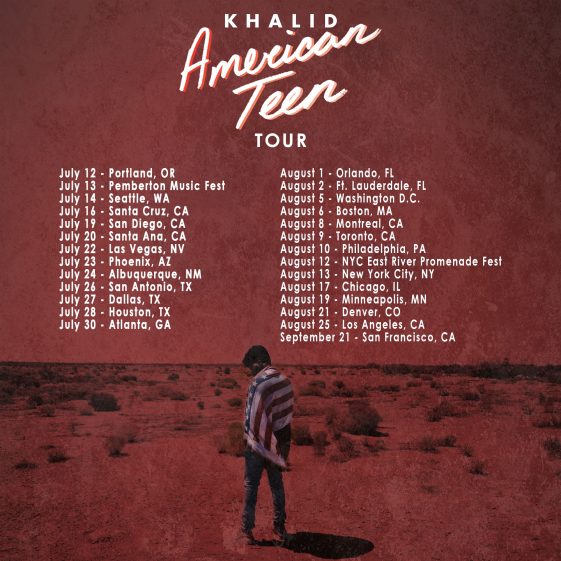 TICKETS ON SALE THURSDAY, MAY 18TH

ANNOUNCED AS THE FACE OF FOREVER 21’S SUMMER DIGITAL CAMPAIGN

(Los Angeles, CA)—19-year-old singer-songwriter, Khalid, announces his second North American headlining tour called “The American Teen Tour” in support of his debut album.  The tour will be kicking off on July 12th in Portland, OR and will be making a number of major stops including New York City, Los Angeles, Atlanta, and Philadelphia.  Tickets go on sale on Thursday, May 18th at 12pm local time and can be purchased HERE. There will be a presale across all dates beginning at 10am local time on Wednesday, May 17th – CLICK HERE.

Earlier today, Forever 21 announced the launch of their Global Campaign featuring Khalid. He will become the face of Forever 21’s Summer Digital Campaign, #F21xMusic, and Men’s Line. Additionally, last week MTV announced Khalid would be part of their global MTV Push: Artist to Watch campaign that will highlight a new breakout act each month across MTV’s on-air, digital and social platforms offering exclusive content and performances.

Khalid has been surrounded by music his entire life. He grew up in a military family, his mother is a singer with the Army and he was introduced to music at an early age. Khalid spent most of his childhood in Germany before moving to Watertown, NY for High School. The summer going into his senior year of High School, Khalid’s family was ordered to relocate to El Paso, TX. By 18-years-old, Khalid, who is classically vocal trained, had drawn on his experiences with moving often and the unique experience of growing up having lived in two continents and parlayed them into the creation of his viral smash, “Location” which helped him to land a major label deal with Right Hand Music Group/RCA Records.  Khalid released “Location” before his high school graduation and it garnered over 1.52 million plays in less than two months.  Khalid’s debut album, American Teen, has received mass critical acclaim with The New York Times calling it “a promising amalgam of bedroom art-soul and 1980s new-wave pop maximalism, and a union of lonely-boy mirror gazing with a sense of larger cultural purpose”. TIME noted, “Preternaturally soulful 19-year-old Texan singer-songwriter Khalid has a way with beats—and words—that speaks to the modern American experience of youth in a natural, resonant way.” Billboard also praised, “…glorious assortment of relatable themes… it’s clear that, much like his bright-eyed lyricism suggests, the best is yet to come”.  Khalid has also performed on The Tonight Show Starring Jimmy Fallon, The Ellen DeGeneres Show, Good Morning America, and at this year’s SXSW where he won MTV’s Woodie To Watch Award. Additionally, Khalid embarked on his first-ever headlining tour in both the U.S. and select European cities where he sold-out every single date before the album was even released. Khalid has nearly half a billion streams worldwide across all partners, and “Location” peaked at #1 at Urban Radio, hit the top 3 at Rhythmic Radio, and in the top 20 on the Billboard Hot 100 chart.  Khalid is currently on tour with Travis Scott.