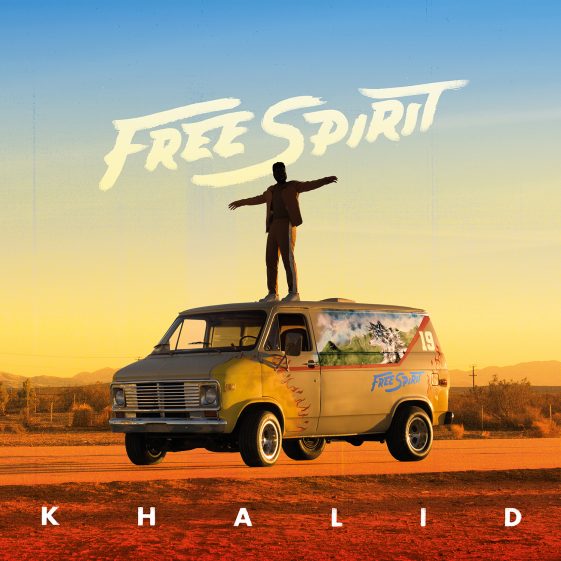 In celebration of the album release, Khalid also announced the big screen premiere of a special companion film, also titled “Free Spirit.”  Partnering with global event cinema distributor Trafalgar Releasing, “Khalid Free Spirit” will be screened to cinemas worldwide on April 3, 2019 – two days before the album release.  The special one-night-only fan event will also include an early listening of the full album. To stay up to speed with the latest information on the cinema event go to: FreeSpiritTheMovie.net

It was recently announced that Khalid would be the musical guest on the March 9th episode of Saturday Night Live.

Multi-platinum selling global superstar Khalid has catapulted into massive worldwide success since he released his first single “Location” right before his high school graduation. The song’s domination (4x platinum) led to Khalid’s major label deal with Right Hand Music Group/RCA Records followed by the release of his debut album, the double platinum certified, American Teen. The album, which garnered Khalid 5 Grammy nominations (along with numerous American Music Award, Billboard Music Award, BET Award, VMA Award, Teen Choice Award, Billboard nominations) received mass critical acclaim with Rolling Stone calling Khalid a “pop prodigy” and TIME Magazine stating, “His thoughtful, relatable reflections on modern youth culture and the limitations of love are just as pitch-perfect as his soulful, measured delivery.” American Teen shattered expectations, as it stayed in the Top 200 for 51 weeks, peaked at #4, and stayed in the Top 20 for 48 out of the 51 weeks it was in the Top 200. The singer-songwriter has won a Billboard Music Award, a Teen Choice Award, a MTV Video Music Awards, an MTV’s Woodie To Watch Award, most recently an American Music Award, and has over one billion streams worldwide across all partners. In addition to American Teen, Khalid has collaborated with some of music’s biggest stars. He has been featured on a number of songs including mega hits like Calvin Harris’s “Rollin” with Future, “1-800-273-8255” with Logic and Alessia Cara, “Silence” with Marshmello, “Lovely” with Billie Eilish, “Youth” with Shawn Mendes, and many more. Khalid’s single the multi-platinum, “Love Lies”, a duet with Normani hit #1 at Top 40 radio and his track “OTW” featuring Ty Dolla $ign and 6lack burned up the airwaves. Khalid wrapped up his third sold-out North American headlining tour and recently, the Mayor and Council of the city of El Paso honored him with a “Key To The City” marking September 13th, 2018 “Khalid Day.” While in his hometown, Khalid performed two sold-out arena shows and dropped his newest track “Better” dedicated to his fans and the city of El Paso along with the “Suncity” EP. The lead single off the EP, “Better” hit #1 at Rhythm radio and is currently Top 10 at Top 40 and the recently released remix of “Saturday Nights” featuring Kane Brown is off to an explosive start.

Trafalgar Releasing is an award-winning, market leader in global event distribution, working in partnership to unite audiences with entertainment and the arts. Trafalgar Releasing is an integral part of Trafalgar Entertainment Group. The recent slate from Trafalgar Releasing has included The Music Center presents Joni 75: A Birthday Celebration, Coldplay: A Head Full of Dreams directed by Mat Whitecross, Burn the Stage: the Movie from K-pop band BTS, Muse Drones World Tour, the Tony Award winning production The King and I: from the London Palladium, Funny Girl starring Sheridan Smith, An American in Paris: The Musical, the world premiere of Peter Jackson’s They Shall Not Grow Old and the recent seasons from the Royal Opera House, Metropolitan Opera, Bolshoi Ballet and Royal Shakespeare Company.