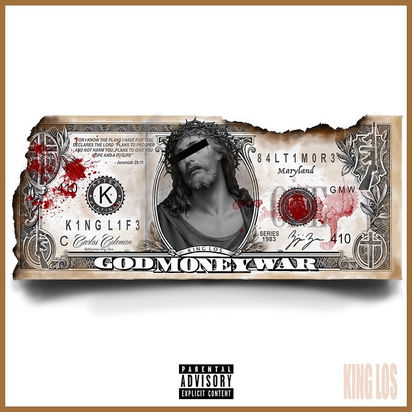 Critically acclaimed MC, King Los will release his new LP, God Money War on June 23rd via After Platinum Entertainment/88 Classic/RCA Records. The digital-only release of God Money War will serve as a prelude to his forthcoming debut album, which will be released later this year. The LP will surely become one of the most talked about releases of the year as it touches on many of the topics affecting society today including politics, race relations and religion among others.

To celebrate the release of the upcoming LP, the Baltimore native has released a new track entitled “Glory To The Lord” featuring Grammy Award-winning singer/songwriter/producer, R. Kelly via The FADER. The infectious and soulful song tells the story of becoming something from nothing.

King Los had the following to say about his upcoming LP, “God Money War is a prelude to my debut album. This project is something that I wanted to get out before I dropped my debut; I just felt that it was something that needed to be touched on now. I feel like God, money and war are the three most essential things that affect us on a daily basis.”

Born and raised in Baltimore, MD, King Los has released a total of 14 mixtapes since 2008. One of hip-hop’s most celebrated emerging artists; Los’ 2014 BET Hip-Hop Awards Cypher and last March’s “Sway in the Morning” radio freestyle have collectively garnered over 2.5 million views on YouTube. Los also hit the Billboard charts for the first time in his career in 2013 when he appeared on French Montana’s “Ocho Cinco.” In 2014, Los signed a new deal with RCA Records through After Platinum and 88 Classic. God Money War is the first release from the partnership.

Having already been praised by some of hip-hop’s biggest names including Kendrick Lamar, Ludacris, Meek Mill, Lupe Fiasco and Pusha T among others, God Money War will surely catch the attention of critics as well as rap enthusiasts with its honest lyrics, soulful production and unwavering message.