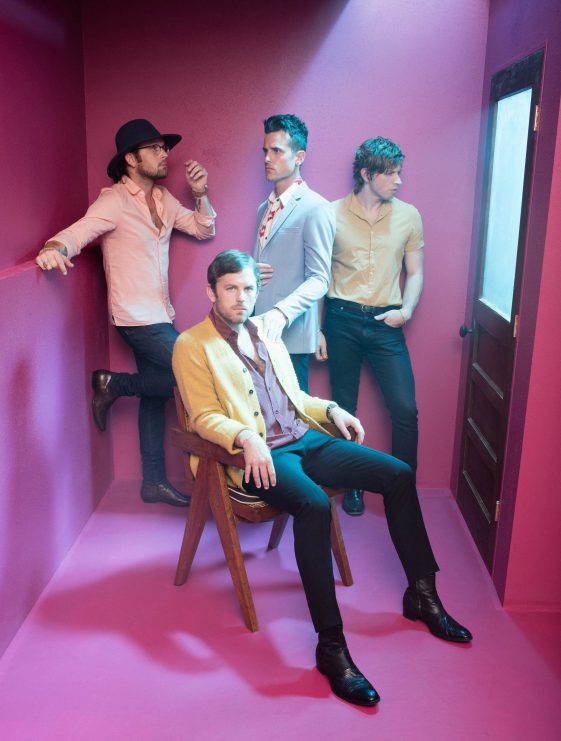 FIRST SINGLE “WASTE A MOMENT” CONTINUES ATOP RADIO CHARTS, BREAKING ALL TIME RECORD AT AAA RADIO FOR MOST CONSECUTIVE WEEKS AT #1; TRACK ALSO SPENT 5 WEEKS AT #1 ON ALT RADIO

New York, NY (April 24, 2017) – On the heels of a #1 album, a chart-topping radio hit, a sold out first leg of a global tour which begins its second leg this Friday, KINGS OF LEON announces that they will be adding a new fall leg of their WALLS tour that will travel to all new North American cities, along with a new summer date in Chicago.

The Grammy Award-winning group will kick off the tour’s third leg on September 27 in Charlotte, NC at the PNC Music Pavilion and travel through 15+ cities before concluding October 28 in Tampa, FL at the MidFlorida Credit Union Amphitheatre. The tour will also include the band’s second stop in Los Angeles, this time at the city’s famed Hollywood Bowl on October 7 following their sold out show at The Forum this January. Through Verified Fan, fans will have presale access to tickets beginning Wednesday, April 26 at 10:00 am local time at https://kingsofleon.tmverifiedfan.com.  Tickets for the tour will be available to the general public for most cities beginning Friday, April 28 at 10:00 a.m. local time at www.livenation.com.

The tour’s initial announcement on the TODAY Show in October prompted an almost-immediate sellout of most of the dates, including major cities New York, Los Angeles, Toronto, Detroit and San Francisco.  The tour has received critical acclaim throughout its trek – of their sold out date at Madison Square Garden, Billboard applauded the show – which they hailed a “rock show spectacle” – for maintaining an intimate connection within a large-scale production. “Every element of the show felt as thought-out as the next… and while the show was certainly a spectacle, there was still something so genuine about its presentation.” Meanwhile, the Boston Globe praised the band for delivering a “royal, rousing performance” and The Patriot Ledger called the “arena rock powerhouse” band’s show “a bracing shot of vitality” and a “terrific rock ‘n’ roll party.” Speaking further to the tour’s production, the Toronto Sun hailed the “sleek moving video screens, dramatic lights, [and] eye-catching imagery.”

Kings of Leon’s seventh studio album WALLS, released October 14 via RCA, marks the group’s first number one album in the U.S., debuting at #1 on the Billboard 200 chart as well as #1 on the Alternative Albums, Rock Albums, Top Albums Sales, and Top Digital Albums Charts.  The album received amazing critical acclaim upon its release, with The New York Times calling it “timeless,” Rolling Stone saying it’s “Kings of Leon at their best” and Consequence of Sound calling the album “their best album in years.” The album includes released tracks “Reverend,” “Around The World” and “WALLS” and their hit single “Waste A Moment,” which Stereogum said sounds like “the Kings Of Leon you remember.” The band will appear with a performance of “Reverend” off the new album tonight on Jimmy Kimmel Live! at 11:35/10:35c on ABC.

Kings of Leon has partnered with CID Entertainment to offer special fan experiences on the tour. Packages include premium concert tickets, a limited edition poster and exclusive access to the ‘Seven WALLS Exhibit’ with a gallery featuring Kings of Leon photos, memorabilia, awards and keepsakes. For full package details, visit http://www.cidentertainment.com/events/kings-of-leon-tour-2017/

*All dates and venues subject to change.

*All dates and venues subject to change.