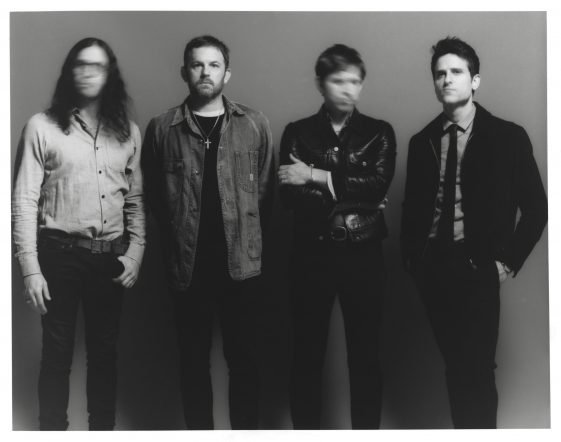 WHEN YOU SEE YOURSELF OUT MARCH 5TH

THE BAND TOOK TO SOCIALS TO TEASE NEW MUSIC

(Los Angeles – January 8, 2021) – Grammy Award-winning, multi-platinum selling rock band KINGS OF LEON officially announces the release of their highly anticipated eighth studio album When You See Yourself coming March 5, 2021, on RCA Records. Lead single, “The Bandit” is available now with an accompanying music video that sets the sonic and visual tone for the album. The band has also made a second track, “100,000 People” available as well. Recorded at Nashville’s famed Blackbird Studios and produced by Grammy Award-winning Markus Dravs (Arcade Fire, Coldplay, Florence + the Machine) the album propels Kings of Leon into 2021 with a modern evolution of their sound.

Pre-order When You See Yourself HERE.

Watch the video for “The Bandit” HERE.

The album, which comes four years after their first-ever number one U.S. album debut, WALLS, has been teased in various formats over the past few weeks. The band even began announcing the album directly through their fans with a special t-shirt mailer revealing album tracks and lyrics, using the moment to raise awareness and money for Live Nation’s Crew Nation relief fund for live music crews.

The band has launched their new merch line available for order through www.kingsofleon.com. The line will include a limited edition run of the “Hero T-Shirt” that fans can purchase for their chance to receive the final one of a kind t-shirt with full lyrics to the new single, “The Bandit”. The band will donate 100% of “Hero T-Shirt” purchase proceeds to Live Nation’s Crew Nation relief fund for live music crews. The t-shirts will be available for one week only, ending Jan 15.

When You See Yourself – Tracklist

Since their debut in 2003, Kings of Leon (Caleb (guitar/vocals), Nathan (drums), Jared (bass) and Matthew Followill (guitar)) have released seven albums (Youth & Young Manhood (2003), Aha Shake Heartbreak (2004), Because of the Times (2007), Only by the Night (2008), Come Around Sundown (2010), Mechanical Bull (2013), WALLS (2016), sold over 20 million albums and nearly 40 million singles worldwide. The multi-platinum selling band has had five singles on the Billboard Hot 100 chart, all seven of their studio albums on Billboard’s Top 200 list and two singles that reached #1 on Modern Rock radio. With the release of WALLS, the band garnered their first-ever number one album debut on the Billboard Top 200. In addition, they have had eight Grammy Nominations, three Grammy Award wins, three NME Awards, two Brit Awards, and one Juno Award. They have toured all over the world, playing at top venues and headlining major festivals such as Bonnaroo, Lollapalooza, Austin City Limits, and Glastonbury. Kings of Leon is set to release their eighth studio album When You See Yourself this March.