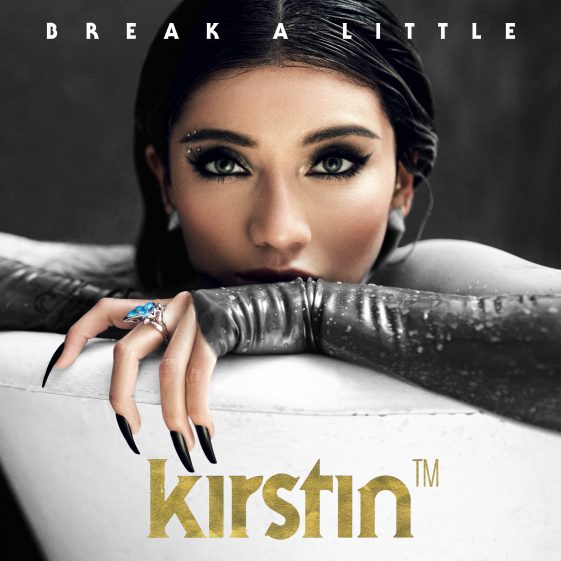 WILL RELEASE DEBUT EP THIS SUMMER

NEW YORK, NY (May 19, 2017) – Three-time GRAMMY® Award-winning multiplatinum singer, songwriter, and one-fifth of Pentatonix Kirstin Maldonado launches a new chapter in her already impressive career, rebranding herself as kirstin and making her solo debut with the release of “Break A Little.”  The announcement comes after considerable speculation, with fans buzzing about the possibility of a solo project since last week’s premiere of Helena Legend’s “Dose of You,” which does in fact include vocals from the Pentatonix standout.  Her debut single “Break a Little” is the first of new music from kirstin, who will also release her debut EP this summer via RCA Records.  “Break a Little” is available to stream/download across all digital service providers now.

Produced by David Pramik, “Break a Little” is a musical departure from kirstin’s a cappella roots, and finds the singer exploring a stylized combination of pop vocals and electronic production.  An evocative mix of piano chords and breathy synths paired with kirstin’s standout vocals, “Break a Little” is an emotional, yet reaffirming track, as the chorus breaks out into a dance-y, infectious beat while the singer declares, “Every time I see your face, I break a little.”

“I’m so proud of ‘Break A Little’,” says kirstin. “I always wanted to write a sad song that sounds happy. I think everyone can relate to this emotion. It’s about longing for something. You’re attracted to a vice or person you know you shouldn’t come back to, but you can’t help it.”

Show-stopping vocals, charismatic confidence, and fighting spirit on full display, GRAMMY® Award-winning multiplatinum singer, songwriter, and one-fifth of Pentatonix Kirstin Maldonado emerges as a solo powerhouse on her debut EP [RCA Records]. Embracing a variety of electronic influences ranging from James Blake to Alina Baraz, she expresses a different side of herself, illuminating dancefloor-ready soundscapes with her seismic and stunning delivery. Kirstin started honing the voice millions know and love as a child in Arlington, TX. At 7-years-old, she went from singing Disney classics in front of the TV to flawlessly belting out a Shania Twain anthem during her mom’s wedding. Growing up, she devoted every minute to singing, remaining active in musical theater through college. On a whim, she and some friends auditioned for NBC’s The Sing-Off in 2011, and Pentatonix was born. Since then, the group has won three GRAMMY® Awards, received a Daytime Emmy® nomination, had seven albums reach top 10 on the Billboard 200 chart, sold out shows across the globe and starred in their own network Christmas Special.  Their RIAA certified gold self-titled album debuted at #1 on the Billboard 200 chart while That’s Christmas To Me has been certified double platinum and A Pentatonix Christmas certified platinum.  2017 sees her grow and evolve inside of the group and out.

Watch the official video for “Break a Little” on Vevo: http://smarturl.it/kirstinBALvid

Get it on Amazon Music: http://smarturl.it/BALAmz

Get it on Google Play: http://smarturl.it/BALGP