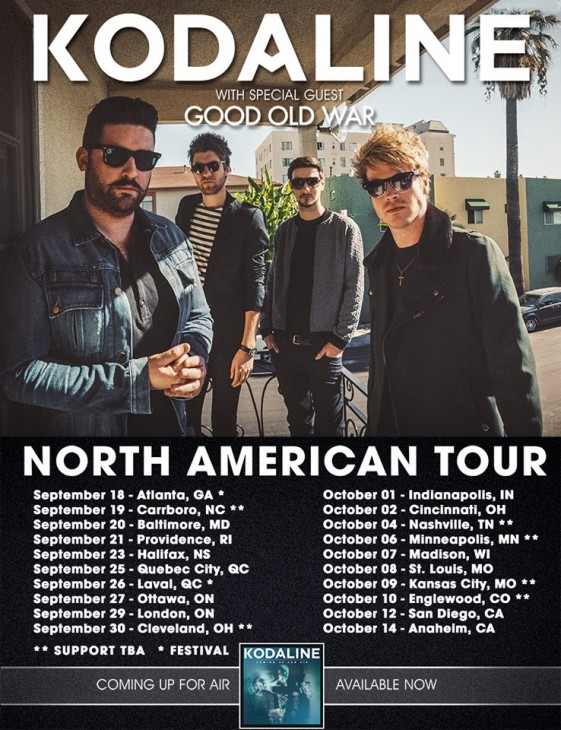 Dublin-bred rock band Kodaline announce a 2015 Fall Tour starting in Atlanta, GA on September 18th. The dates take the band through North American markets including Nashville, Minneapolis, Denver, and San Diego, wrapping up in Anaheim, CA. The tour is in support of Kodaline’s currently available, sophomore album Coming Up For Air, which will be released as a digital deluxe edition featuring three new songs — “Caught In The Middle”, “War” and “Moving On” – and an acoustic version of their hit single, “Honest.”

On July 11th Palladia will premiere Kodaline’s Live From The Brixton Academy, filmed in London to a sold-out crowd.

Earlier this year, Kodaline, a mainstay at alt-rock radio, released Coming Up For Air, the follow up to their debut album “In A Perfect World” which featured the hit single, “All I Want”. The song was featured in several television, film and ad placements including Chicago PD (NBC), Grey’s Anatomy (ABC), Modern Family (ABC), So You Think You Can Dance (FOX) and American Idol (ABC).

Kodaline’s current single, “The One” is in heavy rotation at Sirius Spectrum and The Pulse, with over 3.6 million views of the official video. In the UK the song climbed into the top 5 on the airplay chart and is the second best selling single by a band this year after Mumford & Sons.