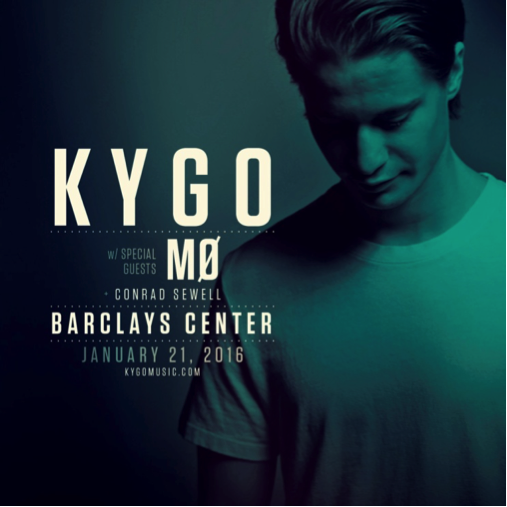 Norwegian superstar, Kyrre Gørvell-Dahll, also known as Kygo, will be playing a headlining show at Barclays Center in Brooklyn, NY on January 21, 2016. Known for his tropical house hits and remarkable piano skills, this musical prodigy knows how to bring fans to their feet. Between the colorful production and Kygo’s upbeat anthems, this is definitely a show concertgoers will not want to miss. Singer-songwriter, MØ, who is known for her collaboration on Major Lazer’s smash hit single “Lean On,” and Conrad Sewell who is featured on Kygo’s “Firestone”, will be the opening acts for this highly anticipated event. Tickets are on sale now.

Throughout his rapid success, Kygo has garnered lots of positive attention from the likes of many including the Los Angeles Times, which stated, “…he’s become the face of a movement”. Billboard Magazine also dubbed him “electronic music’s next superstar.” Since blowing up on the electronic music scene, Kygo has accumulated over 850 million streams on Spotify.  His latest U.S. single, “Stole the Show,” was certified gold or platinum in sixteen countries and the video has over 45 million plays on YouTube.

Kygo recently played a sold-out headlining show at The Greek Theatre in Los Angeles, CA. He made his U.S. television debut on The Late Late Show with James Corden on Tuesday, October 27th, where he performed an acoustic version of his hit song, “Stole The Show”, featuring Parson James (Click HERE). Before the show, Kygo was awarded with a plaque commemorating RIAA Certified Gold Sales of more than 500,000 downloads for his hit single “Firestone”, out now via Ultra Records/RCA Records.