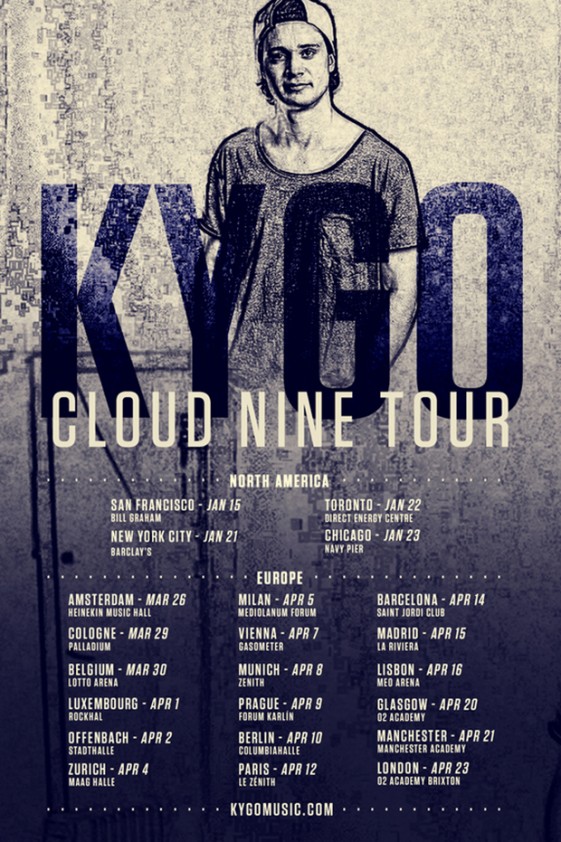 Today, Norwegian superstar and tropical house maven, Kygo, announces his first ever Worldwide “Cloud Nine” Tour. The musical prodigy will be making stops in a number of major cities across the globe including his biggest headlining show to date at Barclays Center in New York City, NY. Tickets will go on sale this Friday, December 12th. See full list of tour dates below.

Since blowing up on the electronic music scene, Kyrre Gørvell-Dahll, a.k.a Kygo, has gone from bedroom producer to one of the most hyped artists on the planet in unprecedented time. His latest U.S. single, “Stole the Show,” was certified gold or platinum in sixteen countries and the video has over XX plays on YouTube. Kygo has also been crowned Spotify’s Breakout Artist of 2015, as songs including “Firestone” and “Stole the Show” helped him reach 1 billion streams. Tipped by Billboard Magazine as “electronic music’s next superstar”, Kygo made his U.S. television debut on The Late Late Show with James Corden on October 27th, where he performed an acoustic version of his hit song, “Stole The Show”, featuring Parson James. Before the show, Kygo was awarded with a plaque commemorating RIAA Certified Gold Sales of more than 500,000 downloads for his hit single “Firestone”, out now via Ultra Records/RCA Records.   With the upcoming world tour and a hotly anticipated album, it is clear this is only the beginning for the 24-year-old Norwegian prodigy.