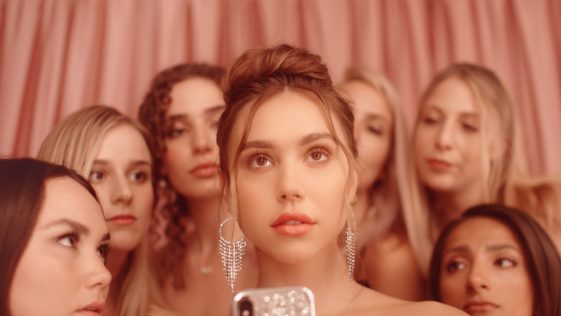 Director Sarah Bahbah said on the video, “Our desire to stay connected has formed a dependency on social media, a dependency that actually weakens our connection. Curated personalities become the ones we focus on, covering our scars with cheap glitter and painting our bruises with fake gold by way of escaping from our internal struggles. This music film is a reminder to step away from escapism and step inwards to self. Although we are creatures of connection, many have learnt to play the characters constructed by social media. In the midst of all the projected individual experiences, sometimes the most authentic and calming thing that can be done is to check in with yourself, take a breath, and call upon the ones you trust.”

Powered by glassy and gliding guitar, a simmering beat, and lush keys, the production unfolds with soaring cinematic scope. Above this bold and bright backdrop, Cutler’s confessional lyrics immediately take hold on the resounding refrain, “I just called you to say, I’m not OK.” With uplifting vocals and music, it possesses the power to instantly connect.

Last week, Kygo released new single “Higher Love” with Whitney Houston, the most awarded female artist of all time, via RCA Records.  The single marks the first new Whitney Houston music released in a decade, since 2009’s “I Look To You.” Both Kygo and Pat Houston spoke to Rolling Stone to explain the collaboration HERE.