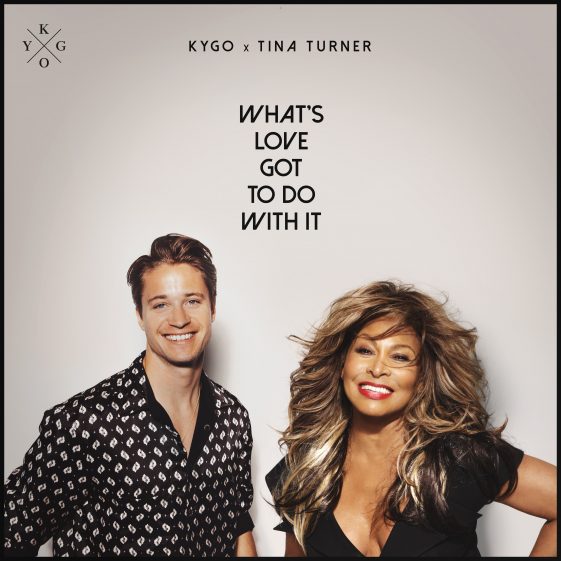 “WHAT’S LOVE GOT TO DO WITH IT”

Global superstar, producer and DJ, Kyrre Gørvell-Dahll – a.k.a Kygo, teams up with the incomparable, brilliant, and legendary Grammy Award winning superstar Tina Turner to unveil a remake of “What’s Love Got To Do With It” – Turner’s iconic #1 song that was inducted into the Grammy Hall of Fame and is included in Rolling Stone Magazine’s list of “The 500 Greatest Songs of All Time.”

“What’s Love Got To Do With It” comes alongside a brand new video directed by Sarah Bahbah and stars Laura Harrier (Hollywood, Blackkklansman) and Charles Michael Davis (The Originals, The Vampire Diaries). Listen / Watch here HERE – out now via Sony Music International/Ultra Records/RCA Records.

Says Kygo, “I couldn’t be more excited to collaborate with Tina Turner, who is an icon that I grew up listening to. ‘What’s Love Got To Do With It’ is one of my all-time favorite songs so to have a chance to rework it has been a very special moment in my career. I love working around timeless vocals and although it’s challenging to preserve elements of the original track and adding my own touch, I’m extremely happy with how it turned out!”

It’s been a big summer for Kygo who back in May released his critically acclaimed third full-length album Golden Hour  which features his hit single  “Lose Somebody” with OneRepublic as well as “Higher Love” with Whitney Houston, the latter of which has more than 651 million audio and video streams combined and charted at Top 40 radio. Kygo kicked off his album release day with performances of “Lose Somebody” with OneRepublic and “The Truth” with Valerie Broussard on Good Morning America’s Summer Concert Series and will be performing on NBC’s The Tonight Show with Jimmy Fallon with OneRepublic on July 22nd.

Tina Turner is revered around the world, inspiring millions through her own personal story, her singing, her dancing and beyond. Her music legacy is a collection of some of the best-known songs of all time, just utter the phrase “You’re simply the best” you’d be hard-pressed to find a person who doesn’t know the next line! Turner rose to prominence in 1958, aged 19, as a duo with her then-husband Ike Turner, initially as a featured singer with Ike Turner’s Kings of Rhythm, recording under the name “Little Ann” on the track ‘Boxtop’. Her introduction to the public as Tina Turner began in 1960 as a member of the Ike & Tina Turner Revue with the hit single ‘A Fool In Love’ in 1960. Success followed with a string of notable hits, including ‘It’s Gonna Work Out Fine’ (1961), ‘River Deep – Mountain High’ (1966), ‘Proud Mary’ (1971), and ‘Nutbush City Limits’ (1973). In 1976, following a string of personal altercations, Tina left the musical duo and filed for divorce. A solo career ensued…In 1977, she went back on stage touring rigorously, then in November 1983, she released a cover of Al Green’s ‘Let’s Stay Together’ which became a hit. In June 1984 she released the ‘Private Dancer’ album and it’s second single ‘What’s Love Got to Do with It’ became a global smash as did the album. From there, Tina became, and continues to be, one of the most loved artists in the world and this incredible career continues to build. In March 2018, ‘Tina’ – The Tina Turner Musical, opened at London’s Aldwych Theatre to amass of acclaim with Radio 4’s Front Row calling it “One of the most impressive musicals I’ve ever seen” and The Times saying it is a “… raw musical triumph”. The smash hit ‘Tina’ – The Tina Turner Musical opened at Broadway’s Lunt-Fontanne Theatre with ABC News raving, “Mind blowing and life changing. A story that needs to be shared, especially today,” and Billboard saying, “The powerhouse voice, jackhammer legs, and above all, the heart. Not to be missed.” Her memoirs, ‘Tina Turner: My Love Story’, released in October 2018, was also met with a similar adulation, “Turner comes across as courageous, optimistic, big-hearted and generous” (Sunday Times), “Astonishing, soul-baring – the must-read memoir by rock’s greatest survivor” (Daily Mail) it also made the Mail On Sunday’s Books Of The Year list for 2018. In 2019, to celebrate Tina’s 80th birthday, her husband Erwin published “That´s My Life”, a Limited Edition photo book accompanied by letters from friends such as Mick Jagger, Bryan Adams and Beyonce. Find out more at www.tina-turner.rocks