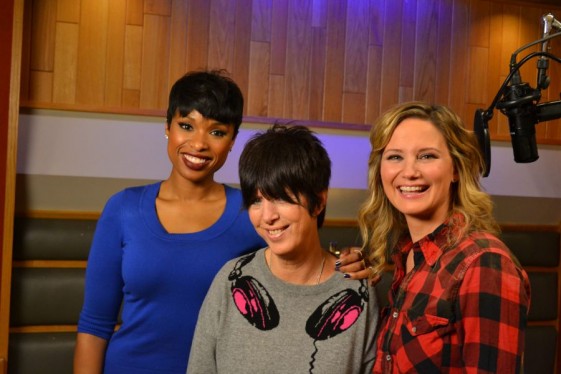 Los Angeles – OWN: Oprah Winfrey Network announced today that legendary songwriter Diane Warren has written a new original song titled “You Will” for Oprah Winfrey and it will serve as the anthem for the network. The uplifting new single features a powerhouse performance by award-winning recording artists Jennifer Hudson and Jennifer Nettles in their first duet together.

“You Will” will be released by RCA Records and available for purchase and streaming beginning Tuesday, March 24.

The “You Will” campaign will premiere on OWN Tuesday, March 24 at 9 p.m. ET/PT during the season finale of the hit series “The Haves and the Have Nots” and will also be available to live stream on Oprah.com. The music video will feature exclusive behind-the-scenes footage from the song’s recording session.

“I was so touched when Diane Warren came to me and said she wrote a song with OWN in mind,” said Oprah Winfrey. “And then to have Jennifer Hudson and Jennifer Nettles bring the song to life with their stunning collaboration…what a gift.”

“‘You Will’ is such a powerful song that I am so very proud to be a part of,” said Jennifer Hudson. “It is always incredible to work with the incomparable Diane Warren, who is consistently creating music that so many people can relate to. I was honored to come together with Jennifer Nettles and create something special for OWN, which stands for so many wonderful things.”

“I have known Oprah for years and love to see this wonderful woman at the OWN network making it so successful,” said Diane Warren. “The sentiment of my song, ‘You Will,’ which is Oprah and her network’s new theme song, is that you should never give up on your dreams, own every breath, own every minute, go live a life that’s got no limits. You can do anything. It’s as simple as never think you won’t, and you will. Jennifer Hudson and Jennifer Nettles perform the song beautifully. I am very proud of this song and the message it sends.”

“I am hugely inspired by the message of ‘You Will,’” said Jennifer Nettles. “Like the OWN network, this song encourages us all to boldly dream. Yet again Diane Warren was able to capture, and orchestrate, this beautiful theme of believing in oneself, and to offer us a song as its anthem. I was honored to be invited to sing with such a powerful talent as Jennifer Hudson. I am thrilled to be able to give voice to this wonderful song with such a gifted duet partner as Jennifer, and to celebrate OWN through music.”
“You Will” was arranged by Grammy Award-winning producers The Underdogs and Peter Stengaard and produced by The Underdogs.

Acclaimed songwriter Diane Warren has written songs for artists across all musical genres including Beyoncé, Celine Dion, Christina Aguilera, Lady Gaga, Elton John, Barbra Streisand, Whitney Houston, Kelly Clarkson, Cher, Mary J. Blige, Aretha Franklin and more. Her songs have been featured in more than 100 films, and she has won and been nominated for numerous awards, including Grammy Award (“Because You Loved Me”) and Golden Globe (“You Haven’t Seen the Last of Me”) wins and is a seven-time Academy Award nominee. In 2001, she was inducted into the Songwriters Hall of Fame. Academy Award-winning actress and Grammy Award-winning singer Jennifer Hudson made her film debut as Effie White in the 2006 film “Dreamgirls,” garnering her several awards that year, including an Academy Award for Best Supporting Actress. She has released three albums, all of which have debuted on the Billboard “Top 10,” appeared in several other films including “Sex and the City” and “The Secret Life of Bees,” and is set to make her Broadway debut this fall in a revival of “The Color Purple.” Grammy Award-winning country music artist Jennifer Nettles is known for her role as lead vocalist of the award-winning duo Sugarland and most recently made her Broadway debut playing the iconic role of Roxie Hart in the Tony Award-winning musical “Chicago.”