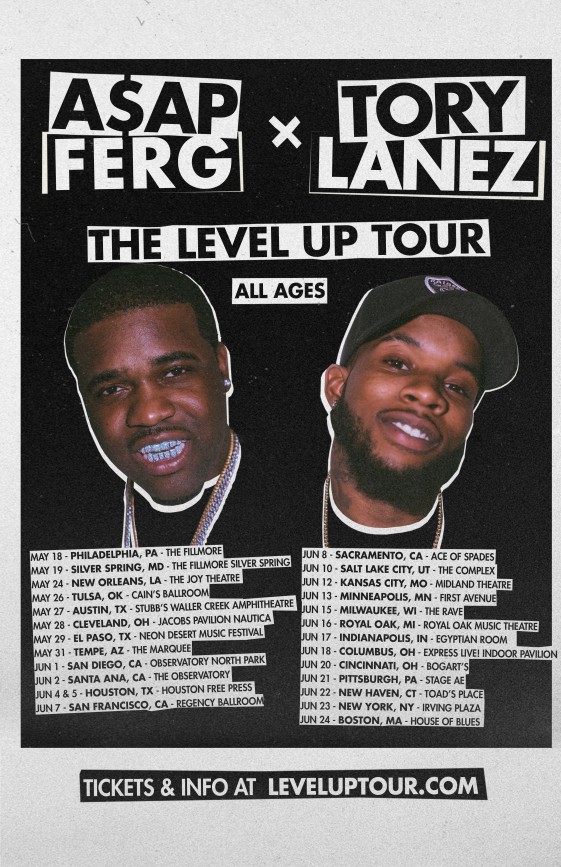 The Level Up Tour: A$AP Ferg And Tory Lanez To Tour Nationwide This Spring

[New York, NY – April 1, 2016] Harlem Trap Lord A$AP Ferg and rising Toronto rapper Tory Lanez are set to bring their “Level Up Tour” to cities nationwide this spring. Ferg and Lanez will co-headline the dates with a special joint set trading off between their own tracks, collaborations and more.

Ferg is currently gearing up to release his sophomore album, Always Strive and Prosper via A$AP Worldwide/Polo Grounds Music/RCA Records on April 22nd.  The highly-anticipated album will feature his current hit single, “New Level” ft. Future, “Let It Bang” ft. ScHoolBoyQ and “World Is Mine” ft. Big Sean and more.  Noisey declares “given the strength of [‘Let It Bang’], you can be positive that Always Strive and Prosper is going to potentially be the best A$AP release yet.”

Lanez is fresh from a massive week at SXSW, with Hot New Hip Hop calling him “one of the highlights of the entire SXSW festival” and Billboard naming him an Artist To Watch, “L.A. Confidential,” a collaboration with Miguel, Benny Blanco and Cashmere Cat, is currently climbing radio charts nationwide—listen here.

The new track follows Lanez’ breakout single “Say It,” which peaked at #1 on Rhythmic and Urban radio charts, as well as #23 on the Billboard Hot 100. Watch the Manhattan rooftop-shot video for the original, streamed more than 39 million times to date, here.