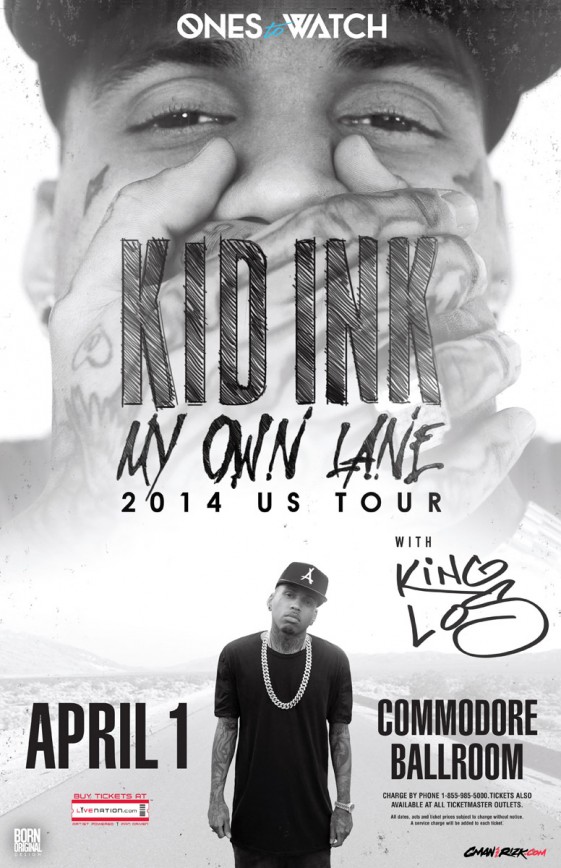 Straight off the release of his successful major label debut, My Own Lane, Kid Ink will kick off his “My Own Lane” 21-date, North American tour on April 1st presented by Live Nation’s “Ones to Watch” concert series with Skype. Joining Ink on tour is Baltimore rapper King Los and Miami MC Bizzy Crook. Pre-sale tickets are now available and tickets go on sale to the general public starting this Friday, February 14th.

Says Ink, “I live on the road, so once again I can’t wait to get out there and perform all my new records and see how the fans respond. Bringing along friend and collaborator King Los is also going to be great. I know he’s going to add some excitement to the bill as well as Bizzy Crook, whom I hear lots of great things about.”

Released January 7th on Tha Alumni Music Group/88 Classic/RCA Records, My Own Lane entered at #1 on Billboard’s Rap Albums chart, #2 on Top R&B/Hip Hop Albums chart, and #3 on both the Top 200 and Top Digital Albums charts, according to Nielsen SoundScan. The album’s hit single “Show Me,” featuring Chris Brown, continues to be a mainstay at the top of the charts; #1 at Rhythmic radio for 3 consecutive weeks and Top 5 at Urban Mainstream radio.

My Own Lane has garnered favorable reviews including XXL.com’s “XL” rating, citing the album as “a success in part because of the plethora of sonic shifts…, providing texture and spontaneity.” Vibe.com states that “so many rappers are full of braggadocio and chest beating that it’s refreshing sometimes to just hear plain, fun music.”