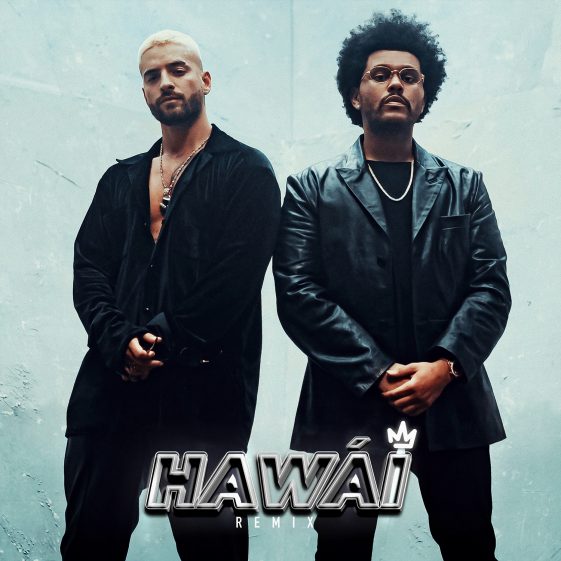 “HAWÁI” has been at #1 for multiple weeks on Billboard’s Hot Latin Songs, Latin Streaming Songs and Latin Airplay charts

MIAMI, Florida (November 5, 2020). MALUMA and THE WEEKND have joined forces to release a one-of-a-kind remix of global hit “HAWÁI”, along with its new music video via Sony Music Latin/RCA Records. Both are available now!

“I have always admired The Weeknd so it feels nothing short of a dream come true to have him collab on ‘HAWÁI’ Remix – he brought another flow to it and sang in both Spanish and English which is impressive,” expressed Maluma.

The melodious banger written by Maluma, The Weeknd, Keityn, Edgar Barrera and Bull Nene, was produced by the Rude Boyz. It tells the classic tale of a relationship breakup set in the modern Instagram age, where the story one tells and the pictures one posts can be deceiving.

Like with the original “HAWÁI”, the remix video, was shot by renowned director Jessy Terrero of Cinema Giants; but this time, instead of Miami, it took place in Los Angeles and features both artists.

“HAWÁI” has dominated Latin and global charts since its release. It has remained at #1 on Billboard’s Hot Latin Songs chart for eight weeks; #1 on Billboard’s Latin Streaming Songs chart for nine weeks; and #1 on the Billboard Latin Airplay chart for three weeks (having scored his eighteenth #1 song on the chart). With “HAWÁI” Maluma has been at #1 on YouTube’s chart of the most viewed videos worldwide for multiple weeks and remains on the chart’s top ten.

The twenty-six year old global Latin music idol has also reached #1 on the Billboard Global Excl. U.S. chart and #2 on Spotify’s Global Top 50 chart. Internationally “HAWÁI” has reached #1 on radio, Spotify and Apple Music in 17+ countries.
About MALUMA:
At only twenty-six years of age, Maluma is one of the leading voices in Latin music and a bona fide global youth idol. Born Juan Luis Londoño in Medellin, Colombia, he formulated his artistic moniker Maluma from the first two letters of the names of his mother, father and sister.

The 2018 Latin GRAMMY award winner for Best Contemporary Pop Vocal Album (for F.A.M.E.) is one of social media’s most popular artists with over 23 million Facebook fans, 6 million Twitter followers, and a whopping 55 million Instagram followers, making him the leading Latin male artist on Instagram and the first and only one to surpass 50 million followers. His official YouTube/VEVO channel has more than 26 million subscribers, having earned him a YouTube Diamond Play Button Award.

With his Maluma World Tour he has achieved unparalleled success, having sold over one million tickets in 105 worldwide concerts in 2017 alone and becoming the top concert-selling Latin artist in the world. In 2018 and 2019, he broke records achieving full houses in all of his shows throughout the United States and Europe selling out Madison Square Garden (New York), the American Airlines Arena (Miami) and two The Forums (Los Angeles), among others. With his 11:11 World Tour he also sold out Israel’s largest venue, Yarkon Park in Tel Aviv (60,000+ audience); made history at the 18th annual Mawazine Festival in Rabat, Morocco, setting an all-time attendance record with his headlining concert in front of 200,000 people; and performed for the first time ever in Riyadh, Saudi Arabia in front of 25,000.

In 2018, Maluma entered the fashion scene with his edgy, youthful and authentic look, and style. He has been named a “Menswear Icon in the Making” and “Men’s Fashion’s Newest Muse” by Vogue. In addition, he was one of GQ’s “Men of the Year” in 2019 and continues to gain the fashion support of designers such as Kim Jones (Dior), Jeremy Scott (Moschino), Olivier Rousteing  (Balmain), Donatella Versace, Calvin Klein, Christian Louboutin, Louis Vuitton and more. In 2019, he attended the Met Gala for the first time, being one of the first Latin urban artists of this generation to be invited by Anna Wintour.  Maluma has also released top campaigns and commercials as the face of global brands such as Moet Hennessy, Michelob and Adidas.

Since joining Sony Music Latin in 2015, Maluma has released four albums Pretty Boy Dirty Boy (2015), F.A.M.E. (2018), 11:11 (2019) and Papi Juancho (2020). Maluma is the youngest artist to simultaneously hold both the #1 and #2 spots on Billboard’s Latin Airplay chart (with “Sin Contrato” and “Chantaje”) and only the sixth act to ever achieve the feat. To date Maluma has had eighteen #1 singles on Billboard’s Latin Airplay chart.

About THE WEEKND:
Filtering R&B and pop through an ambitious widescreen lens, The Weeknd took over popular music and culture on his own terms. The multi-platinum three-time GRAMMY Award winner is the #1 most listened artist in the world on Spotify and is a top 10 artist of all time for RIAA singles.

His 2020 album After Hours is the #1 most streamed R&B album of all time (followed by his 2016 album Starboy at #2), and his 80’s nostalgic track “Blinding Lights” went 5X RIAA-certified platinum and broke the record for Billboard’s longest-running #1 on its US radio chart. The track quickly became his fifth to go #1 on the Billboard Hot 100 (following Heartless’ immediate #1 debut), holding the spot for four weeks and later breaking the record for most weeks spent in the top five in the chart’s history.

Alongside his gilded musical career, he’s graced the covers of CR Men, King Kong, TIME, Forbes, Variety, Rolling Stone, Esquire, Harper’s Bazaar, and GQ along with the late night stages with heralded performances on SNL, Jimmy Kimmel, Stephen Colbert and the VMA’s where he accepted the awards for Video of the Year and Best R&B.

In recent times he has made acting appearances in TV and film with 2019’s film Uncut Gems as well as starring in and co-writing an episode of the hit show American Dad.  He generously shares, with over $2M in donations made in 2020 to various charities. The continuous record breaking of charts, sales and streams, headlining the biggest festivals and stadiums in the world, and his ever mysterious public persona combined solidifies The Weeknd as one of the most compelling and significant artists of the 21st century.